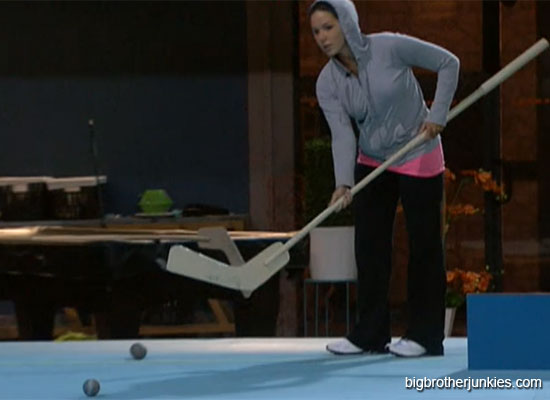 Danielle should keep practicing, as she'll likely get a shot tonight

What a difference a week makes. Last week at this time, I had no clue who was going home because the game was being played at it’s highest level I’ve seen in a few seasons. You had a clear division in the house with one key swing vote who was brilliantly playing both sides of the house without burning bridges on either side.  At the end of it all, I felt Ashley was going to stick with her team and eliminating Kara, and I was right.  What I was wrong about was feeling Jenn was going to somehow make a bold move and change the dynamics of the house.  It turns out, she’s just another floater/follower who will eventually get eliminated 4th or 5th.

To get access to the flashbacks, view any moment of the season so far, simply click on the link below and get 3 free days

Enough pushing the feeds, now to the meat and potatoes of my post after the jump:

Big Brother gave the contestants a little hockey rink with a stupid hockey stick that looks like a cross between a goalie stick and a $5 stick you get at wal-mart that has 0 curve to the blade (I used to play hockey growing up, I’m a stickler for these things). This is so they can “practice” for the HoH competition tonight that will likely involve 85% luck and 15% skill earned through the practice.  Last year, Jordan of all people won a similar competition, but it was golf related. If Jordan can win one of these luck competitions, it’s clearly anyone’s chance tonight.   In a perfect world, I’d like to see Shane win because I’m still rooting for him, but every single houseguest tonight probably has a roughly equal shot at winning.  There is no clue to predict who will pull this off, so I won’t even try.

I can predict who is going home with some certainty, however.   Here is how the votes will go:


Votes needed to be evicted (4)

There won’t need to be one, but just in case = tiebreaker will be JoJo going home

Shane is the only potential to vote for JoJo, but honestly he kind of done with teams and would rather keep relations with the house and Danielle than be the lone vote to go down with the sinking ship.

It appears JoJo will have to call up MTV and try to get on some Jersey Shore spin-off show because she’s going to have a lot of free time this summer…. unless of course she walks right back in the house and competes with Kara and Jodi to return.  That could happen.   Honestly, Jodi deserves a second chance… talk about unfair.  Not that she was evicted on day 1, that stuff happens.  However, she wasn’t even freakin voted out.  How wrong is that?  Some guy walks in the house who recently won $500k, then got last pick in some weird draft.  He picks the playboy model and the ‘girl next door’ and is left with Jodi as the last pick.

So in a matter of like 30 seconds, he’s left to decide if he should keep Kara, Danielle or Jodi.  He even said it himself, he doesn’t even know her last name.  Talk about a crap twist that still bugs me.   I’m not sure if she’ll be let back in the house because I have no clue if she’s been in sequester or not, but I think we all agree she at least deserves a chance.

Anyway, I will be starting a new thread shortly before the live show tonight to chat about the episode.  I had fun doing it last week and will do it again this week.