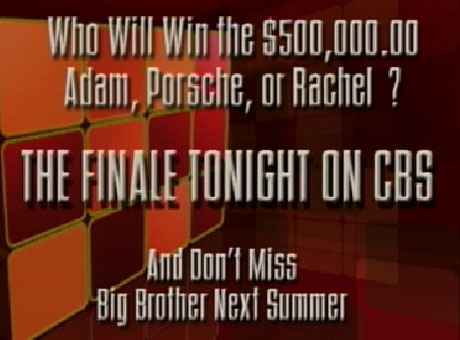 Well it’s been a long summer, and it’s all come down to tonight.  Two former winners, and another former finalist entered the house this summer, and here we sit at the end with two “newbies” who floated their way through more than half of the season, and one fiery red head who has a passion for winning nearly as strong as her passion for her boyfriend.

Who will win tonight?  Well, that really depends on what happens during the live episode (airing tonight at 9:30 EST after Survivor).  If Rachel wins the final HoH competition against Porsche, she chooses who sits next to her, and reality is she’ll likely be choosing who is going to win $50k.  This would be her 4th head of household win to go along with 2 vetos, which would make her a lock regardless of who’s sitting next to her.  Adam can pretend he’s the swing vote, but if Rachel wins her 4th HoH, I’d almost guarantee a unanimous decision from the jury.  Worst case would be something like 5-2 with Rachel still winning.

The tricky part would come if Porsche won.  It’s likely Porsche would take Rachel because she already promised, and going back on that now would guarantee Adam won it all.  However, if she won and sat next to Rachel, you’d see a situation like this:

Rachel was a target all game
I’m sure Rachel will use this line that she had to fight to stay in the house the entire season, and being nominated prior to veto 4 times definitely makes her a target, Porsche was also nominated 4 times prior to veto.   It just appears Rachel was a bigger target than Porsche because she told anyone who would listen that is the case.  The reality is, they were both big targets and both had to fight.

Rachel was loyal while Porsche was a floater
This is partially true. Rachel was in fact loyal to Jeff, Jordan and Brendon all game.  However, they were forced to align themselves early otherwise there is no way the vets had a chance.  Porsche on the other hand did float until she found an alliance that worked for her and stayed loyal to it as well.    She took a path that most players take their first time through Big Brother.  Those who form an alliance on day 1 usually don’t last very long (*cough* The Regulators).

Despite Rachel making it seem like the entire world was out to get her and she overcame such incredibly tough odds to be in the finals, the reality is Porsche pretty much had the same game as her.  The biggest difference was that Porsche didn’t cry every time she lost a competition.. in fact, I don’t think Porsche cried at all this summer.

In this situation, Rachel will still probably win.  Not because Porsche doesn’t deserve it – she does – it will be because I don’t think Porsche has enough charisma to convince the jury that she’s had a very similar game as Rachel, but possibly overcame tougher odds because she entered the house completely alone and had to pick a stranger as a partner.

My prediction for tonight:

Porsche wins HoH and takes Rachel to the final 2

Votes:  (who they want to win)

CBS has also confirmed that Big Brother 14 will be here next summer, so make sure you’re following me on facebook or twitter for updates on that through the winter and spring!

Also, Survivor starts tonight, so check out my Survivor blog!

See you guys tonight when the winner is announced!

Previous Too Little, Too Late For Adam?
Next Big Brother 13 Finale Recap