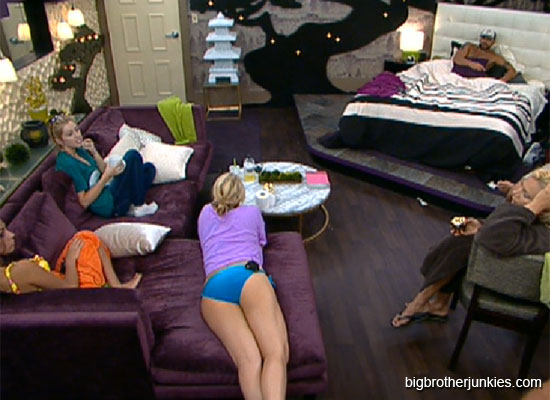 With this many people in the house, it’s hard to really get a grasp on alliances.  Even when one happens, they seem to break like the next day, take the Frank/Willie alliance that lasted probably 3 hours.   With that said, it appears the power alliance is forming and it may remain that way for a least another day or two… until someone freaks out again.

Flashback on your live feeds to 5:30pm bbt on Sunday, and you’ll see both Janelle and Britney’s teams making a “secure” pact to at least take them to the final 6.  I’d definitely be worried if I was sitting on one of the other teams, but when you remember the power alliance has Willie and Joe on it (both seem to be huge loose cannons), things could blow up at any minute.

I’m going to keep this thread open and blog about random events throughout the day, so make sure to refresh every once in awhile to see any updates.  You can also follow along on the live feeds for free

10:00am bbt – The house is still waking up and things are civil in the kitchen right now.   However, Joe and Shane are in the pantry talking about the scheme that Frank and Boogie are trying to work up.  From the current plan, Willie is going to make Frank sound safe and secure, and who knows, it could possibly happen for a week.  As it stands, I am still clueless who is going home on Thursday.

10:20am bbt – Not much happening right now, Shane, Boogie, Wil, Willie are all outside on the deck, near pool.  JoJo and Frank are playing pool and the rest of the players are scattered about in the house. 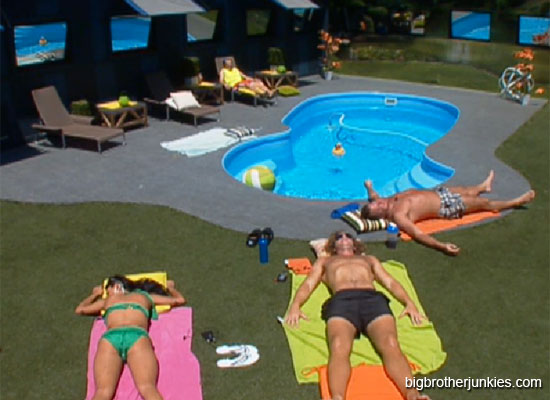 11:50am bbt – It’s time to get their bronze going for the live show on Thursday.  Houseguests laying by the sun right now just chatting about various things, not much game talk right now.

1:54pm bbt – Willie is up in the HoH room chatting with Frank about potentially getting rid of Kara.  The sway in power this week is insane.  Part of the reason Willie wants to keep Frank is he thinks they can make a pretty sneaky powerful duo to make it to the end… getting rid of floaters first.  This is opposite than recent seasons where power players go first.

Willie feels Booger is out to get him regardless of what happens simply because he wants to get Russell Hantz’s brother out of the game.  Both are pretty much bashing Booger but it’s really hard to tell if this is just lip service on the part of Frank right now.

2:14pm bbt – The talk is finished, it sounds like they’re going to have a secret alliance for now.  Willie is going to push to keep Frank in the house, but again, this could last a few hours before it blows up.