Tonight comes the close of Kalia’s wild ride as her first Head of Household experience.  It is also the first time this season a new player to the game has won, and it’s showed.   I paid attention to the week, and tried to filter through the cries, lies, and umm.. automobiles(?) to bring you a breakdown of this week.

Things started strong and looked bright for Kalia and Daniele the second she correctly answered the final question of the HoH challenge last Thursday, and the pair were sitting on top of the World with a strong chance to start shifting the balance of power in their direction.

However, noobs will be noobs and the second Jeff started in on Kalia, she folded like a lawn chair.   She pretended to hold strong and still nominated Jeff and Rachel, but in her head Jeff was going to be ok with being a pawn.  Basically admitting she sucks at challenges, her theory was to nominate Jeff so he could definitely play for the veto and hopefully win, therefor not allowing Rachel to win.  Naturally, Jeff wasn’t too happy about it (nor do I blame him), and made sure Kalia knew of his displeasure.

Playing like someone in over her head, Kalia even went as far as openly cheering for Jeff while giving up on the veto competition, which was one of the more uncomfortable moments I’ve seen this season.  It was like a girl cheating on her bf, him breaking it off and hating her for it, but she still pretends they’re in a relationship and tries to act like nothing happened.  Just plain awkward and embarrassing for Kalia.

As if the week couldn’t get weirder, when Jeff won the veto, Lawon volunteered to be the replacement nominee, and nobody in his alliance felt it was a really bad idea.   This week was literally like watching a high school football team try and compete against a team in the NFL.  You wanted to just throw in the towel for them, but at the same time you couldn’t stop watching because it was a complete massacre.  (I’m at my metaphor limit this post)

Mostly due to Jeff and a lesser part Shelly, his alliance was somehow able to not only keep Rachel in the house this week, but likely evict a member of their own alliance.   This picture below sums up Kalia’s entire week.   She requested to speak to Rachel about last minute plans, and Rachel is blowing her off despite being nominated, and Kalia is left sitting in the kitchen alone like a lost puppy.  It’s sad… completely over her head. 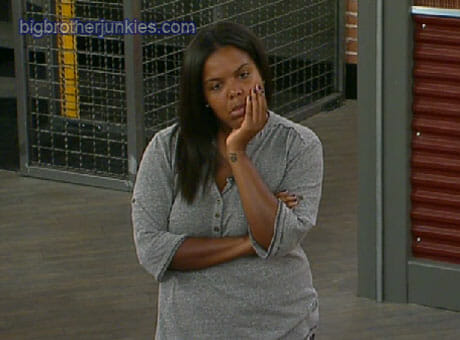 Kalia waiting for Rachel, who blew her off

How often do you see a nominee blow off the HoH who has sunk her own alliance this week to save the nominee?  It’s hilarious and pathetic rolled into a nice ball called Kalia.

I thought this was actually going to be harder than what it was, and I still could be completely wrong, but here is how I see the day / night going.  Daniele and Kalia are still going to realize they just made one of the biggest blunders they’ll ever make on this show, and probably be the ones scrambling for the votes to try and save Lawon.  However, Shelly and Adam and secured tightly to Jeff and Jordan’s ass, so it’s not going to work.  Porsche has even told Kalia she’s going to vote for Lawon to go, because that’s “the plan”, but reality is that even Porsche isn’t dumb enough to stay with a sinking ship.

Can Not Vote:  Rachel, Lawon, Kalia

Lawon gets voted out 5-1

Lawon is then forced to face off in a challenge with Brendon to re-enter the game, and loses.  Brendon, Rachel, Jeff and Jordan are back together and one of them wins HoH promptly putting up Kalia and Daniele.

This should really be one of the more entertaining live Thursday night shows they’ll have all season, and the live feeds that turn on shortly after the show airs should be even better. If there was a time to check out the live feeds, now is it.  You get 3 days free, free music, and still a lot of entertainment on your computer to kill off the dog days of summer

Thanks for reading! Feel free to share your thoughts below