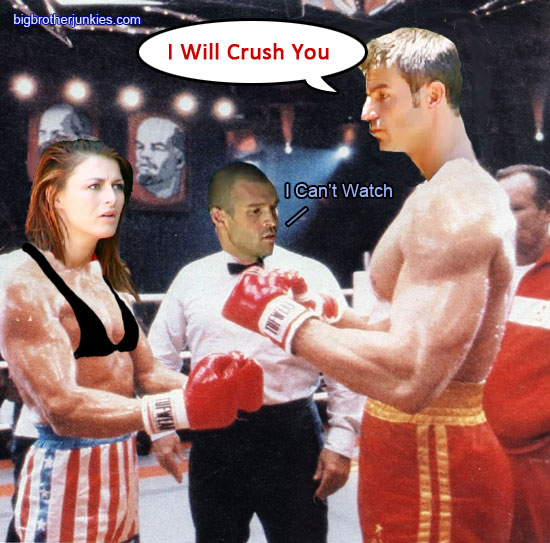 So today on the live feed around 12:45 PM, Jeff approached Brendon and Rachel and let them know that they’re (J/J) are probably not voting in favor of Brendon.  His reason is that Brendon is target #1 and he doesn’t want to go against the house at this point, but I’m calling bullshit.  Jeff was the guy up there trying to pull some Vince Lombardi shit (hall of fame NFL coach) in the HoH a few weeks back when it was 5 against the house (fab four + Daniele).  Now, because the “house” is against Brendon, he’s suddenly going to side with the house?  Last I checked, Jeff and Jordan combined with Rachel make the vote a tie at worst, and it just takes swaying 1 person to secure Brendon remaining in the house.

It sounds to me that J/J are kind of getting tired of being tied to the whole Brendon and Rachel alliance, and with Adam and Shelly riding their tails, there really is no reason to keep them around at this point.  It’s dead weight that just keeps a target on them.   Jeff is doing the brilliant thing of cutting the cord on these two, but making it completely look like Daniele’s fault, which is really a bit genius.   The power four had to split up at some point, and now that J/J have the numbers even without them, you get rid of them but keep their votes in the jury.

Anyway, I had to post this, I know the show is on CBS right now and I’m going to watch it in a minute, but most of what’s shown is stuff I already know, so when I’m done, I will probably either update this thread or start a new one on a live blog talking about what’s happening in the house.  I feel like I neglected my readers yesterday by being awol (stupid online video game got me hooked for a day), but I’m back, BITCHES!

Oh and btw, sign up for the live feeds.  It’s 3 days free, and it helps me pay for the website.  It really does, I’m not on a blogspot server, so I gotta dish out a decent chunk of change each month to bring you my lousy photoshop jobs.    Click here to sign up and support Big Brother Junkies!

(btw, I don’t want to hear any complaints about Rachel being Rocky in the picture above.  The screenshots I took worked better that way!)

ABOUT US
FOLLOW US
©
wpDiscuz
2
0
Would love your thoughts, please comment.x
()
x
| Reply