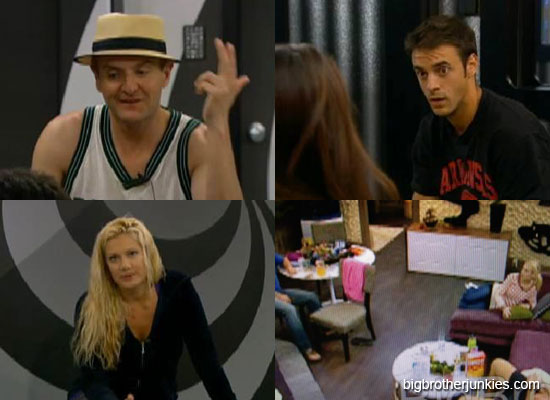 So while I was on the way to the dentist’s office (fun), I notice some pretty big breaking news in the Big Brother 14 house.  The freakin mentors have been leaked.  What happened was that the feeds went on for a bit yesterday, and Big Brother Buddy captured a bunch. As you can clearly tell, the mentors are Boogie, Dan and Janelle.  The little blonde appears to be Britney, and it pretty much has to be.  It was down to Britney or Renny, and I seen no signs of that red headed spunky Renny anywhere.

I’m still going to go with the mentor theory, as that is the most prominent leak, and honestly the concept is working out really well for “The Next Food Network Star”.  It allows the show to bring back older people but not have them directly involved in the game like what happens on Survivor every season.

I will be updating the profiles up top and giving as much information as I can about them.  I don’t really know their exact role in the game just yet, but at least I’ll have some profiles up soon.

Remember, only a few hours to save on the live feeds!