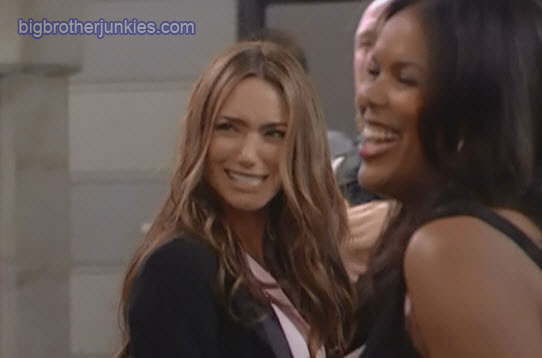 Big Brother 13 Starts Off With A Bang And A Thud…

Big Brother 13 started off really strong tonight with a solid episode, but also a thud.  What was that thud?  Well, it could be Keith’s jaw hitting the floor over all the girls, Adam possibly punching a wall, or perhaps Jordan’s brain when she’s trying to think.

A bunch of things were revealed, and they weren’t really kidding when they talked about twists, it seems like every minute Julie was throwing something new at these poor noobs.   I’ll run down the twists in a minute, but first off, let me share my thoughts on the episode:

Ok, with my thoughts out of the way, let’s recap the first set of twists this season (I’m sure they will add more if things become stale)

The current pairs are:

The teams were quickly put to their first blur-filled challenge where each pair would hop on a giant banana that made Rachel giddy like a 14 year old girl hearing the word penis for the first time.   It was pretty amusing to see Adam try to stick his head up Dominic’s ass, Dick and Daniele own the challenge but hand it over to Rachel at the last minute, and the fact that CBS would show a girls panties very clearly in one shot but then practically blur out her entire back the next angle like her bare ass was hanging out.

Like mentioned above, Rachel was handed the first Head of Household title where she is now going to not only decide who may go home, but who is going to get a free ride to the top 10.  Interesting choice, and you can see who she picked if you want spoilers by clicking here after 1am EST.

The twists and the cast should really make for an interesting summer in the house.  Overall I felt many of the people were annoying, but on the annoying level where you love to hate them.  That’s kind of been the Big Brother casting personality in the past many seasons now, so not much has changed there.

I will do my best to keep you updated with whatever info I can, so let’s have a great summer!

More images will be  uploaded to my facebook fan page, so make sure you follow it for the latest screen grabs I didn’t add here.

Previous Cassi Colvin Out Of The House Already And Other News..
Next Breaking News: Someone Left The House For Real (Spoilers)