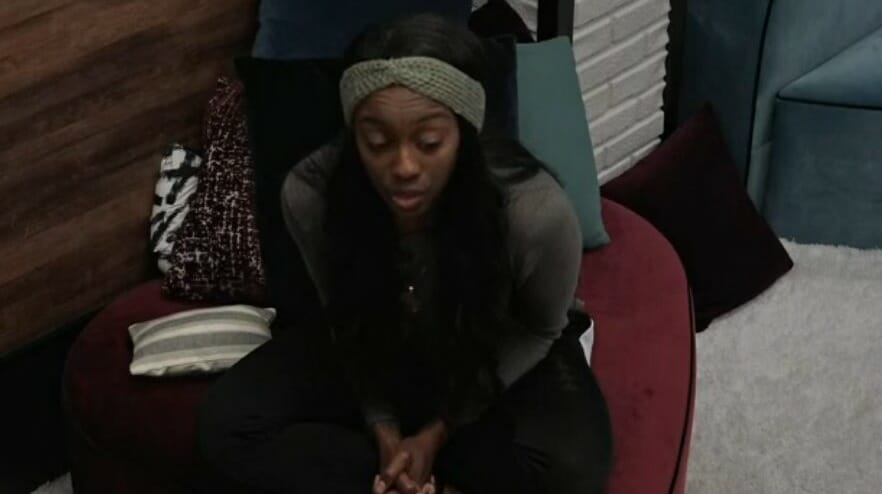 I’m still on my anniversary vacation until Tuesday so this is mostly a quick update.

Last night, the feeds went down around 2 am and switched to pet cams. They usually do that when they are filming something for the show, but when the feeds returned, it seems as if nothing happened. I mention that because the feeds are once again down to pet cams and have been that way for an hour or so. My guess? It’s probably nothing just like last night but I do know they are airing the veto on Tuesday this week so there is a slim chance they are having a late veto meeting. However, doing it at 7 pm is just odd.  Hopefully it comes back up and I can update this post what it was.

Speaking of the veto, I am beginning to wonder if Da’Vonne may actually not use it. The way she is talking, she is still pretty undecided and actually kind of believes that Tyler is the target. That concerns me because it’ll be absolutely disastrous if she didn’t use it. Yes, it will definitely buy her a week or two, but that’s it. That said, she’s in rough shape regardless so there is always a slight opportunity that she saddles up next to Dani and uses her as a shield as she floats her way to the finals. I know it’s not good TV and certainly not good feeds, but sometimes you have to do what it takes to win.

The more I think about it while I type this, the more I think not using it is her better longterm option.  I still want her to because I love when the big alliances are forced to eat themselves, but it’s a gamble and one I’m glad I don’t have to make.  I’d probably use it out of anger for being nominated last week but I don’t claim to be a pro.    I think it would certainly help her decide if David weren’t such a wildcard. The dude just doesn’t want to talk game so Da’Vonne simply can’t rely on him.  What is she to do if she uses it? Go to battle against the house with Kevin by her side?

One strategy she may want to consider is saving Tyler.  Think about it. If she were to use the veto on Tyler and claim she was told he was going home, she wanted to extend Bayleigh’s olive branch back to save him. Yes, Kevin will leave, but he’s gone anyway soon. This way she gains favor with Tyler and Christmas, and probably remains in Dani’s graces because Kevin is her target anyway. Dani will probably feel flattered their plan to convince her worked TOO well. Between that and the super weak wall performance, that puts her in a position to just float.

It’s a crazy thought, but her back is really against the wall and all her options suck. Saving Tyler buys her a solid 2, maybe 3 weeks. By that point, anything could happen. Evicting Tyler probably puts her as #1 target. Simply not using it just keeps her position as #2 target after David (once Kevin is gone).

tl;dr version – Da’Vonne is in bad shape right now. Kevin is likely gone this week or next. Should Da’Vonne save Tyler to earn goodwill buying her a few weeks and then seeing where the house stands?

What are your thoughts? Should she use it or not?  I’ll update this post if feeds return while I’m still awake