It’s eviction day again and it seemed like a fast week. I’m just now catching the exit interviews with Kaysar. (Whaddup Kaysaaaar!) Christmas’ reign of arrogance is ending and I’m hoping for better hoh results than last week. (I’m still picturing Day losing that hoh comp by one question!) Unless there is some kind of drama today, Bay will likely be going home tonight.

I hope Bay and Tyler mend things after the season is over but for game, I’m glad Day is probably staying. This is more important to her and after seeing a really good player want to leave, all my cheering is going to go to people who want to be there.

Both Bay and Day have a problem with talking too much and giving away info but Day takes things less personally.  Bay made the mistake of thinking a friendship with Christmas automatically made her safe in the game. Bay made a friend, not an alliance.  She talked game with her way too much without forming any kind of official agreement. I’m not defending Christmas because she handled this week poorly. She had an excellent position in the house and that’s mostly evaporated after everyone saw how she behaved as hoh. (Ian said this to Tyler yesterday too) Bay would’ve still been pissed but Christmas should’ve simply told Bay why she put her up.  She should’ve admitted she used the game info Bay gave her because they weren’t actually working together. Christmas wasn’t going to do that because it didn’t fit the narrative of her new school BB morals she’s always talking about. She also shouldn’t have let half a day go by, knowing she wasn’t using the veto but letting Day and Bay think she might. This is a big screw up for Tyler too in my opinion. (A lot of game damage could’ve been avoided) Christmas tried to have it both ways. She wanted to make a game move and surprise them but she also wanted to be a victim and have everyone feel sorry for her. 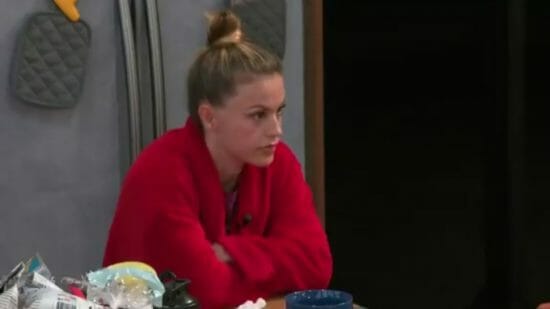 Christmas tried to repair the damage with Bay and Day yesterday. The first conversation she had with Day was when she asked Day if she wanted to stay and insinuated she could make it happen for her. (Day never said she didn’t want to stay) Day showed unbelievable patience when she said yes and thanked her. They both apologized for how heated it got and Christmas said she was sorry for not shutting it down sooner. (How about don’t even start it, ya holiday elf?) Not only is Christmas’ power over, I’ve not heard one person discuss what Christmas wants this week because they don’t care. However, I did hear Dani and Nicole talk about getting Christmas out soon. She’s served her purpose so she can go. 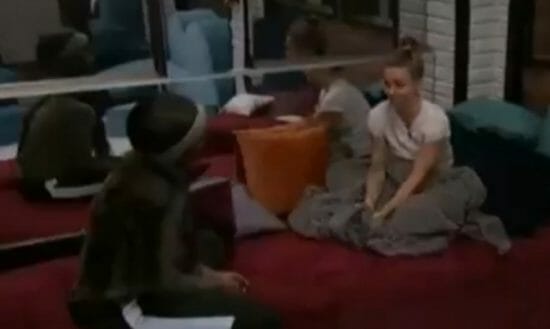 Later in the evening, once it was decided Day was staying, Christmas spoke to Day again. She asked Day for a favor and said she wouldn’t put her on the block again and asked that Day not put her up if she won hoh. Naturally, Day agreed to this stupid request. Christmas just made a new alliance with Day, Nicole and Dani. If it were real, Christmas wouldn’t have to ask Day not to put her up. That alone, told Day it isn’t a real alliance. (It isn’t real for Day either and this confirmed it shouldn’t be)

Christmas talked to Bay and Bay let her fake mend things.  Christmas said she was sorry for hurting Bays feelings and Bay told her they would be fine after they left the house and would still be friends.  Kiss, kiss, hug, hug and all that shit…. 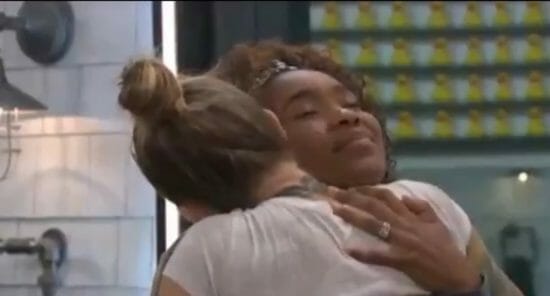 Derrek has spent quite a bit of time on social media saying he didn’t have any involvement and that’s the only reason I think it’s relevant. You can decide for yourselves but I’ve said before, no one really needed Derrick. These people already know each other and agreeing to work together preseason only gets you so far anyway. Wouldn’t Cody and Nicole have worked together anyway? I just don’t like people trying to lie about it. Besides, Janelle is one of my faves and she did it too.  It isn’t realistic to think returning players aren’t going to pre game in an All Star season. THEY KNOW EACH OTHER. They did it in season 7 too.  It’s just more irritating because some of it’s coming from someone who isn’t playing the game. It leaves us feeling like ‘Derrick, join in or shut up and butt out.’ The last all stars didn’t have the large alliance style of play either so it still felt like BB war. Anyway, back to the recap:

After Ians game was blown up by Bay, Ian got scared and tried to repair things with Nicole. I honestly have no idea what Ian would do with an hoh. Maybe he’s only playing nice with Nicole until he has his chance but I don’t fully trust it. I’ll say I’m being optimistic about him but I definitely wouldn’t put all my eggs in his basket.  Even if he decides to go after Cody, he wants to keep Nicole in the house. Keep that in mind if you’re hoping for an Ian hoh but also want Nicole gone.

If Day were to win the hoh, she needs to go after Cody, not Tyler. Dani and Nicole are after Tyler so he’s a target already.  The problem Day or anyone will have is getting the votes to get Cody out of the house, that’s going to be a problem.  A couple of days ago, I thought Day would be screwed even if she stayed because she’s pretty much on her own. Kevin is almost useless, she doesn’t trust David and Enzo is playing both sides. Nicole won’t put her up but she won’t protect her either. Yesterday, all that may have changed. Dani and Nicole had a conversation about their preferred final 4 and final 5. They included day in it, so as much as I’d like to see Dani or Nicole leave, it would be a huge mistake for Day to go after either one of them. Now that only one of Bay or Day will be left in the house, Cody even seems more on board with Day staying longer. When he named his next 4 targets, he specifically wanted Day to go last. (They want her to go after Christmas for them) It still isn’t a great scenario for her because I don’t know who would take her to the end and she’d probly have to win a lot but this puts her much closer than she was before.

This is unrelated but I’ve never bought into the idea that Memphis wanted to take Ian out so he could get revenge for Dan. I think Memphis is a jackass and I’m definitely not sticking up for him. I’m just saying, I think this idea was planted by production for a DR clip.  Revenge for what? ?Dan has never made comments or shown any signs of someone who wanted revenge against Ian. If Dan was going to blame anyone for his loss, he would’ve blamed the jury.  Ian didn’t screw Dan in BB14 because Ian won the last hoh. He took Dan to the F2, not the other way around.  It does make sense that Memphis would see Ian as a threat tho because he beat the guy who beat Memphis…. who also happens to be one of the best players to ever play…if not the best.

I don’t even know who I’m hoping wins the hoh tonight because not everyone will make the move to help their game the most. It isn’t their fault that we have more info than they do. Ian would be ok as long as he’s lying to Nicole. Day would be great if she’ll set her sights on Cody.  A week ago, I wanted Tyler to win so he could go after Dani. DaVonne is one of the people I’m rooting for so I’m not sure I want that to happen right now. I’m also over Tyler because he wanted to quit.  Call me crazy,  but part of me wants David to win it. (He won’t be winning a wall comp tho if it ends up being endurance)

I’d like to see Cody leave and it’s not because I don’t care for him. I think he’s playing a good game and I always respect that in a player.  I just think Cody leaving causes the best odds of the game breaking open. If Dani was to go, it’s still going to be Cody and Nicole as a pair along with Cody and Enzo. There will still be Tyler, Cody and Enzo as a trio and Cody and Memphis as a duo. If Cody left, the most amount of people would have to rethink their endgame. That’s the reason I’d like him to go. I’m bound to be disappointed because I don’t see the votes to get him out right now. Oh well, we’ll find out soon.