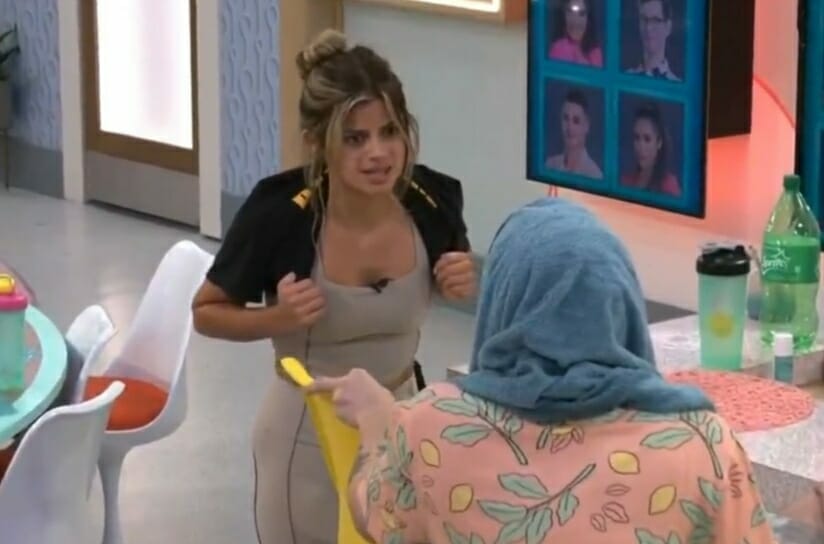 Good morning, yesterday was a bit on repeat which is normal when noms are set and they’re just waiting. People are trying to plan for the twist (as much as possible) and what they’ll do if they win the next hoh. Taylor continued to try to “make amends” for all the bad things she’s done, (eye roll) Paloma had more of her strange discussions and Daniel gave up the hoh room to Paloma. (The hg’s think her odd behavior is related to not getting enough sleep)

Brittany was a topic as her poor attempt to work around the twist the day before was a big fail with Pooch. Her name is being tossed around alot. She’s a potential target for the guys and the women seem ready to let her go too. She really screwed up her game when she gave up info to Pooch that Ameerah would target him. She hadn’t built any relationship with Pooch yet to go to him and word vomit so much. If you recall, she did the same thing with Daniel a few days ago. She spilled everything she could think of (on everyone) in order to show Daniel and Nicole they should work with her. The women are also annoyed Brittany told Michael about the womens group and invited him into it.

I get it, she’s scared of leaving because of the twist but that was NOT the way to go about it. They only thing it’s shown the people she’s already working with and the ones she’d like to work with is that she can’t be trusted to keep her mouth shut. Her pitch to Daniel was she could be a valuable teammate since she was good at observing people and could report back. Well, she certainly couldn’t read Pooch when she spoke to him. Everything, from the way he spoke to his body language, screamed he did not want to work with her but she spilled anyway. (Bummer, I like Brittany)

Alot of people are assuming Brittany will be saved with the vote but I’m not so sure. On the last episode, Daniel had the most DR’s as the HOH. I believe it was 11 and Paloma had 10. She got way more screen time that either Brittany or Alyssa, which could turn into votes.

Taylor is finally able to hang out with everyone now and the hg’s (mostly) have decided the Taylor situation was a misunderstanding. I’m referring to the convo Taylor had with Monte and whether or not she said Paloma was targeting the guys. (They better show this on the show since it wasn’t on the feeds!) Since that came out, in spite of Monte wanting to keep it quiet, it’s allowed everyone to focus on that 1 thing. (The other 500 issues they had with Taylor haven’t been mentioned anymore) Indy even tried on Taylor’s clothes and no surprise, it wasn’t a big deal anymore. (It could be because Indy is a target now too so it doesn’t matter) Taylor knows the only way she’ll stay will need to involve the twist.

As for Indy, she’s finally talking game with people and she’s aware that’s been a complaint from some of the others. Actually, she had a whole lot to say about a lot of things yesterday. She’s about the only person who tells Paloma to shut up and chill out.

I like Indy. She says whatever she wants and she’s unintentionally funny. She told Paloma she talks too much and gives up too much info accidentally. I have no idea what kind of game Indy will play but I’m curious to see it.

Since Paloma isn’t talking as much game anymore, Jasmine and Ameerah have taken over being in charge of girl power.. There gonna show these guys how an alliance sticks together by saying Brittany needs to go and hell, they can take out Indy too. That’ll teach ’em! (I actually like Paloma more than I do Jasmine)

Joseph wants to target anyone who votes for Taylor to stay so there’s that. …There isn’t much else to say about him because he just looks at himself in the mirror and compares muscle sizes with Monte. (real exciting stuff)

Monte is worried Taylor could stay and if she does, he wants her targeted again immediately. This makes me think he’s the one who lied. Taylor took the blame anyway because, well…the block. She apologized to him for not articulating what she was saying well enough. It isn’t enough to help her though because he still wants her gone.

I’ll still take Monte and Joseph’s convos over TP’s (Turner & Pooch) I swear, they sound like they’re in high school. They actually discussed what their “number is,” you know, how many ladies they’ve gifted with their awesomeness. (These guys may actually be toilet paper) They’ll put Michael and Brittany otb, as of this moment anyway. I mean, this guy just reads ladies man, right?

Michael wants to target TP but he may have screwed up by discussing it with Ameerah. (Thank you Michael, you are my fave for the day) I don’t think he actually told Ameerah he wanted to target them. He just said he heard the house was wanting to target them and she didn’t have a lot to say back. It’s possible she does want to go after them but is keeping quiet. It sounds like Monte and Kyle are ok with it and thanks to Paloma, Michael is in an alliance with those two. (I like that Michael talks to himself/us so I hope he keeps it up. He may be our best chance at avoiding a bro-fest) He’s also been spending more time with Kyle and warned Kyle the house pairs him with Monte. This may have been the most enjoyable game talk I’ve heard so far. Kyle is also laying much lower than I thought he would so this could be a good pairing for Michael. Michael knows Brittany screwed up and is smart to branch out more. I like her but she won’t help him win this game.

Let’s see, who’s left? Alyssa has gone from strategizing with Paloma to almost nonexistent. This could help her not be targeted for a time but but it’s not helping her build anything. (I’ll be really happy when she and Paloma can take off those damn identical shirts) After Taylor apologized to Alyssa if she’d ever offended her, Alyssa said she knew it was sincere since Alyssa didn’t even have a vote this week.

Alyssa gave me some medical info I did not know before. Apparently, when you have your babies really far apart in years, they won’t resemble each other but when they’re spaced closely together, they’re more likely to have the same eye and hair color. Who knew? Taylor obviously didn’t know either because she seemed really surprised at the things coming out of Alyssas mouth.

Daniel may have bought himself some time for doing the house bidding this week but he’s not leaving this week with much more than Nicole as a F2 and Jasmine liking him. I can’t say much more about Nicole. She had good relationships with Terrance and Taylor but barely put in any effort to try and talk Daniel out of his stupid plans this week.

Palomas change in behavior is probably the biggest thing going on at the moment, at least with the viewers. The hg’s are aware she’s saying some really off the wall things but for the most part, they don’t seem that concerned. It’s been mentioned that she needs sleep and when she goes off on a tangent about the metaverse, bitcoin, nothing being real, this being all a dream, trying to “eject herself” and many, many other things, they just move on. (I’ve been sleep deprived and this ain’t it) Ameerah said she wanted the “old” Paloma back, Nicole made sure she was eating and other than that, they just ignore it.

People online are either diagnosing her with multiple things or telling people not to doing it because it’s not appropriate. I’m not going to do either one so I’ll just say Paloma has talked at the speed of light since night one. However, what she’s talking about has drastically changed. She was very game focused which transitioned into being focused on circumventing the rules of BB in order to share money. This has transitioned into talking about all these other things. I don’t know her so I don’t know if this IS her normal. I do know that I don’t feel comfortable making jokes about it at the moment. I’ll just leave it at that.

Mamba had to change its name and they’re “bleep” for now. I think this is meant to be temporary until they come up with something. Maybe they could just leave it and every time they say it, production can bleep it out. Motley Crew had to change their name which they are now calling Inception. (They’re all pretty stupid names)

Here’s a pic of Taylor and Paloma from the first couple of days in the house. I’ll post it since after tomorrow, I don’t imagine I’ll be using it:

Unless something eventful happens, I won’t do a recap tomorrow. (I’ll wait until there’s something to talk about) It would take something big for Taylor to stay and even if she does, she’s probably going to continue to be targeted. Brittany is definitely in danger heading into Thursday and so is Indy. (So are Alyssa and Paloma but they’re in danger from the twist) The only thing I could see potentially helping Brittany past tomorrow night (other than winning) would be getting saved by the vote. There’s at least the chance more people could want to work with her if they think the fans like her. Of course, that backfires at times too and makes some people want to get rid of anyone they think is a fan fave. The other people in the most danger after week 1 are probably Turner, Pooch, Michael and maybe Joseph, only because the guys alliance is the only thing he really has so far. The people who I see as the safest are Monte, Kyle, Ameerah, Jasmine. I see everyone else in the middle somewhere.