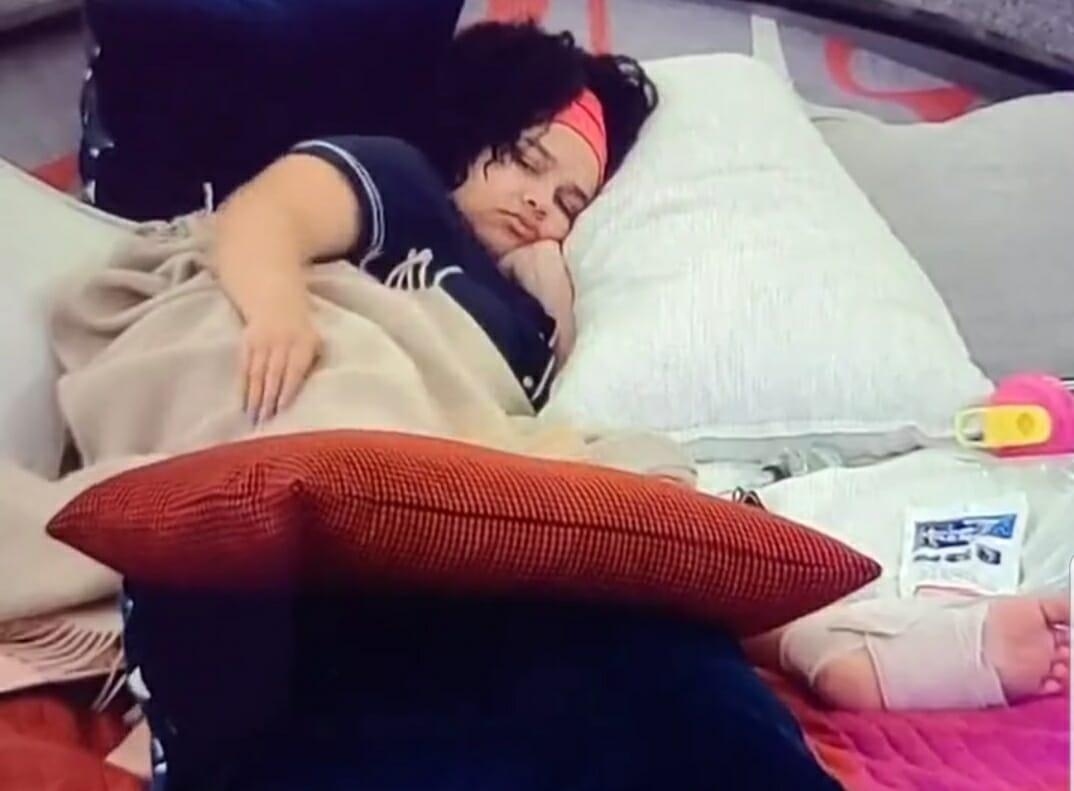 Good morning BBJunkies! I hope you’re all having a great start to your day. Today is more of a recap of events rather than the feeds because….there were no feeds. The rumors turned out to be true and Paloma is gone from the house. Although she was very much a mean girls girl, I can’t say I’m happy she’s gone. This is Paloma telling Taylor she didn’t care what she had to say and then asked if she was being rude. (This was also when Paloma was being “nice” to Taylor):

Not only did she have the potential to give good feeds, she was also gaming the most up to this point. Of the 3 biggest alliances, she started 2 of them and knew about the 3rd. She’s also just 22 and had most of the house wrapped around her finger so she must have alot of charisma. I can see why she was cast for the season. I wish her well but she’s gone so enough said.

As Steve’s already told you, our new HOH is Jasmine. It sounds like the 2nd part of the comp either involved food or fake food. They were all a big mess when the feeds came back and Jasmine had crutches. (No scooter?)

Monte carried her to the HOH room and I think she’s really gonna enjoy all the extra attention this week. (I kept waiting to see pictures of her blonde hair as a child but it didn’t happen)

I know some people are in an uproar this morning because they’re sure Jasmine’s foot touched the ground. We didn’t see it on camera so we’ll never know. Her foot isn’t on the screen when she hits the lowest point. Last night, I was sure her foot touched the ground and I was equally sure Taylors did not. (I’m also pretty sure I’m biased after only 1 week of observing these 2 women)

The hg’s were chosen the way it was done on BB22, with the outgoing HN’s choosing the new ones. They are Pooch, Nicole, Daniel and Terrence. (Daniel was already complaining but honestly, if I had to be I have not, I’d want to be one with Nicole)

Michael, Ameerah and (Alyssa?) talked about trying to get Pooch otb as a pawn but actually evicting him. Ameerah, who’s been very anti Taylor and Brittany has realized it isn’t good to keep evicting all the ladies. Jasmine has other plans and said “you thought you were off the block but baby you’re going right back up, week 2 lets go” about Taylor.

I’m sure Ameerah and Alyssa will try to talk to her about it but her hatred of Taylor seems like a big hurdle. Jasmine, Joseph and a couple others think Jasmine has a couple of days to decide on her noms too.

It looks like a repeat is coming withTaylor trying to hang on for her BB life.

Pooch was suggesting they backdoor Taylor, hoping she won’t be chosen for the veto. He’s also volunteered to be a pawn!! He wants Taylor, Brittany and Indy to be the next to go. (Did he find left over material from Nicole’s BB18 finale outfit? I know they found Big Meech’s hair left in the house after her season)

As for the episode last night, they shockingly made the right call. If you look at how this has been handled on past seasons, it’s at least consistent. (Codys hoh in BB19 is an exception to this tho)

This entire twist was stupid imo and I’m not even saying that because I hate twists. First, they advertised this as something “never been done before on BB.” That’s bullshit because it’s basically a battleback. I guess the “never done before” part was the hg’s voting on which person on the block would battle. (Ok, so instead of voting to evict, they were gonna vote on who they wanted to evict?) How is that much different? The only difference is in giving the “evicted” house guest a chance to stay.

I enjoyed seeing how badly Taylor wanted to stay and her reaction when she did.

After seeing Taylor demolish Alyssa in the comp, at least we know the night would have probably ended the same way, even if even if Paloma hadn’t left on her own. Brittnay would’ve been safe with the vote, Pooch would’ve probably chosen Paloma over Alyssa (based on his convos) and Taylor would’ve probably beaten Paloma worse than she did Alyssa.

I’m sure Daniel wasn’t thrilled with both his targets moving on to round 2 of the hoh comp.

Today should be a good (by good, I mean informative) day for feeds. Ameerah, Indy, Alyssa and Brittnay are planning to talk to Jasmine about taking out Pooch. Ameerah already did a little bit. So far, Jasmine seems pretty set on backdooring Taylor. Taylor has brought Jasmine bandages, ice packs, etc. this morning and in return, Jasmine has called her a bitch and a hoe. (Lord, its only week 2 but I’m gonna need help getting thru this hoh!)