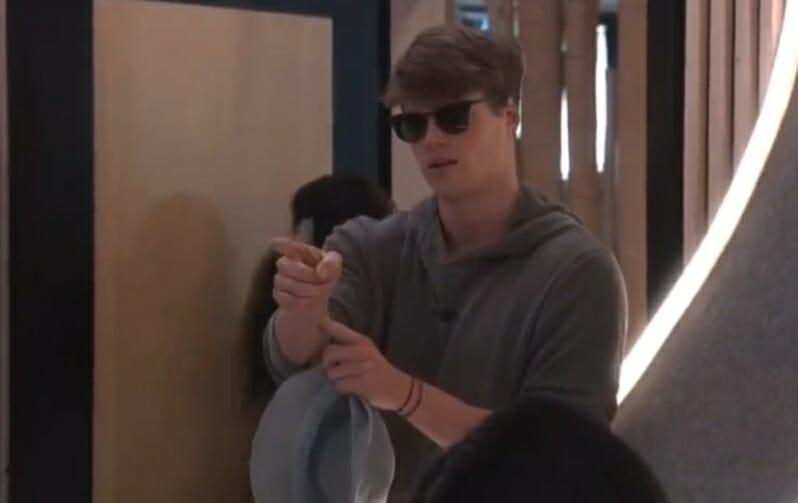 Good morning, I hope you’re all doing well with this crazy heat! The hgs are complaining about being stuck inside but it’s the only place to be for me this week.

I’ve been building retaining walls for flower beds and it’s taking forever! I can only work on it a couple hrs in the morning and then again during the last hr before dark. Even then, it’s sooooo hot. I’d planned to do it in the Spring but had surgery in February and it was June before I could do very much. At this point, I’ll be lucky to have it done by the end of Summer! (If you’ve ever tried to dig in Missouri, you know it’s just rock after rock!!)

ISteve’s already mentioned the schedule change for this week but in case anyone missed it, the Thursday episode won’t be aired until Sunday. I don’t believe we have any confirmation regarding how long the feeds will be down yet.

Some of the guys are still freaking out over a guys vs girls thing happening. (Monte, the most) On the surface, it does appear that way. The reality is a bit different because sure, they’re taking out a guy this week but Paloma already left. That will leave them with 7 men and 7 women if Pooch goes on Thursday. (I still think they’re going to do the eviction on Thursday and just show it on Sunday. Just my opinion, I don’t know)

Anyway, on top of that, most of the women are NOT loyal to the womens group. Ameerah wants Indy and Brittany to go and so does Nicole. Alyssa seems like she’d want those two plus Taylor out. Jasmine wants Taylor and Brittany out and Brittany’s already ditched the women.

I will say, at least this year, most of them want these women out for strategic reasons. (now that Paloma’s gone) The two exceptions may be Indy and Alyssa. Indy wants to work with Joseph and Monte but even she’s being strategic by accident. The guys said they didn’t want to go after Indy since they think she’s most likely to flip on the women and the women want her out before jury. (She doesn’t know this tho) As for Alyssa, I don’t think she’s anxious to take out women but all she can see right now is Kyle. She’s already given him info he’s been trying to use.

Monte kept trying to rally the votes to keep Pooch but Ameerah has said ‘not gonna happen.’ None of his pitches involve how Pooch would be good for anyones game. He mostly talks about the way Pooch became the target. He said he wasn’t asked, he was just told that everyone wanted to Pooch out. He went around saying this to people and asking “who is everyone?” He also said he doesn’t want Pooch evicted if it’s based on a lie. (Taylor says Hi) He actually said “I won’t stand for it.” He’s just whining and he already knows the answer to his question. Pooch volunteered to go up, the women decided to take the shot and they have the numbers at the moment. They have them in part, because Monte didn’t give Daniel or Michael the time of day the first week.

Unlike Monte, Kyle’s accepted it and moved on. He’s concerned about the guys becoming targets too but he realizes it’s not a hill worth dying on. (Kyle’s game has impressed me. He has pretty good instincts for someone who doesn’t really know the show) Kyle also has bigger concerns at the moment. He likes Alyssa, wants to spend more time with her but doesn’t want to be a bigger target. (Sorry, you can’t have it all my dude)

Pooch and Turner tried to work on Michael again. They sort of offered him an alliance without offering him anything. Michael noticed and cam talked about being left out of their alliances last week. He also said he hoped Pooch was excited to meet Julie. (I really like Michael)

Turner has been a big topic lately too but it’s not game related. (He was next on the list for the women to target but Brittnay may be competing for that spot) This is something else and I usually avoid this stuff but it’s being talked about too much to leave it out. (I don’t like when fans start commenting on how often a hg showers or doesn’t shower. It’s because, for all we know, a person could be showering when the feeds are down)

The hg’s have made comments for a while, asked why Turner wasn’t doing laundry and asked him to wash his feet before getting in the hot tub. Turner himself, even said he’d learned he needed to shower more during a group convo about what they’d learned in the house so far. Now, people are getting pissed when he sits or lays on their beds. Could he end up becoming a target over hygiene? Has that happened before? (I can still hear Danielle Reyes in BB3 saying “wash your nasty ass hands” about Jerry)

Jasmine has laid in the bed for 2 full days. She commented on people not coming to check on her as much anymore. (Her power ended Monday but she didn’t get the memo) Ameerah told her the guys were paranoid about the women and said they needed to socialize more. (No shit, they should’ve been aware of it sooner) Jasmine also did a bit of Taylor trash talking with Terrance and that mostly sums up her day.

Brittany asked Alyssa why it seemed as if the women weren’t including her. (She’s noticed) Alyssa told her the truth and said they all noticed her talking to Joseph. Brittnay said she wasn’t talking game with Joseph (she was) and said she didn’t understand why Ameerah could talk to Joseph but she couldn’t. (She has a point) Unfortunately for Brittnay, she has no subtlety to her game and everyone sees what she’s doing. Ameerah and Indy can lie and say it isn’t game talk because they…you know….have an actual friendship with him.

Nicole, and especially Daniel have been spearheading the Brittany stuff. I’m not saying they caused it because it was already happening but they’ve been taking it to a different level. When Brittnay was seen whispering to Joseph, Nicole began wondering if Brittnay was going to change her vote. (She wasn’t) It’s not a secret Joseph has been trying to save Pooch so it kind of fit. This caused Jasmine to bluntly ask Brittnay about her vote. It’s obvious to Brittany they don’t trust her. What isn’t obvious to her is they way she’s caused it to happen.

Daniel, apparently needing someone to trash, has made Brittany his new target. (I guess all that Taylor anger needed to go somewhere now that he’s not bashing her) He’s just too nasty for my taste. Shit talk all you want about someone having a big mouth, how you can’t wait to get them out, etc. Instead, he says stuff like “f*cking Eeyore, moping around the f*cking house all day, shut the f*ck up” while referring to Brittany.

Terrance is the same way about Taylor. She’s been nothing but nice to him and he says stuff like “I’m gonna check her ass. She’s so f*cking stupid.” He was referring to when Taylor screwed up and said something that insinuated she’d be there next week, with Pooch in the room. (Ya, it was a mistake but what the hell? Settle down Terrance!) Personally, I didn’t find Taylor’s mistaket as bad as Joseph campaigning for Pooch to stay yesterday….to Taylor!!

Pooch has been too touchy feely with Joseph and he finally asked Pooch to cool it. Now Joseph feels bad because Pooch is really quiet around him and seems like he’s avoiding him. (Oh well, Frankie and Zach 2.0 is over) Joseph said he hopes the hoh comp is a bench press and I thought it was funny.

Kyle, Michael and Brittany continue to talk about working together. (I have no idea who is sincere) I like the pairing of Michael and Kyle but I’m not so sure about Brittany. Although I think she’s very loyal to Michael, I also think she’ll screw his game up on accident. She has such a big mouth that I actually think she’s a liability to whoever is working with her. She seems really nice but game instincts, hell no.

That’s it for me today so have a great Wednesday!