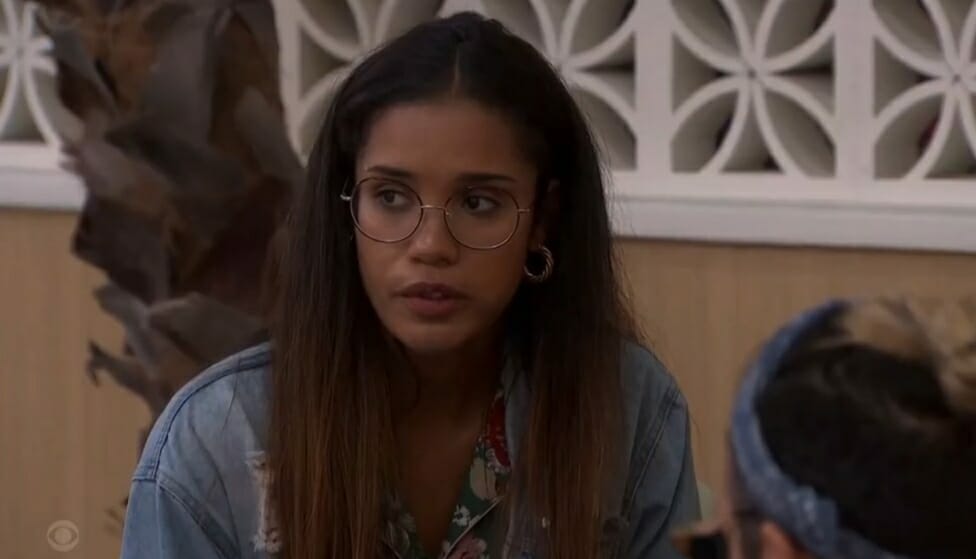 It’s eviction day and so far, it looks like we’ll still get a blindside! We’ll see the veto ceremony too since they couldn’t fit it into last night’s episode. Can I also say, that was one hell of an episode!! It was heartbreaking to watch, in spite of already knowing what had happened. If you watch the live feeds, you know they could’ve shown it to be even worse.

They only have 40 plus minutes to fit everything in and as good as it was, it was still a partial miss for me. Don’t get me wrong, I thought the episode was great but due to a lack of time or possibly kindness, production followed their usual blueprint. They threw Daniel and to a lesser degree, Nicole to the wolves and left out the rest.

To the tv audience, it appeared as if any bad treatment Taylor received came from this specific incident with Nicole and Daniel.

Even knowing what had happened, it was so hard watching Taylor be concerned that she’d done something wrong before understanding the situation.

They were also very kind to Ameerah with her edit. She may have said she didn’t think Taylor meant anything bad by her comment but this was after she had stoked the fire with Nicole.

I felt a bit guilty for loving the shot of Turner as people were helping Jasmine when she fainted or almost fainted. Those guys went running to help her while Turner took a quick step back and just stood there. Haha

Speaking of edits, the evicted hgs (Paloma and Pooch) are doing the usual spin of “they don’t show everything” and even “the live feeds are edited.” Paloma came out with a statement insinuating the live feeds are edited too. Pooch has been fighting with people on Twitter and Instagram since he was evicted. These lines about editing are old and ridiculous so can we put this to rest finally?

To: Past, present and future houseguests,

You are correct to a certain extent. Obviously, the episodes are edited and you could be presented to us in a way that isn’t accurate. You are also correct to say “the feeds don’t show everything.” The live feeds do turn off at times so there are moments in the house we do not see.

However, what this argument never addresses are all the moments we DO see. You say we didn’t have context for what we were watching. Ok, please give us the context. What happened while the feeds were down that caused you to behave so atrociously either before or afterwards? While the feeds are on, they are live and they are not edited like the episodes. We are watching conversations in real time.

If we see and hear you say something racist, sexist, asshole-ist or derogatory in any other way, it means you said it. It means, those words came out of your mouth. You cannot say it didn’t happen. What you can do, is give us the context you claim we are lacking. What happened while the feeds were down that made it necessary for you to behave the way you behaved?

You aren’t required to share this with us. Once you’ve left the show, that choice is yours and you’re entitled to your privacy but you can’t have it both ways. If you choose to engage on social media with fans, please come with more than “it was the edit” and “you don’t see everything.” You arn’t being asked about what we didn’t see. You’re being asked about what we DID see. Please enlighten us, give us the context you claim we don’t have. Otherwise, go away quickly, quietly and leave us alone.

We have the ability to see whats going on in more than 1 room at the same time. You don’t have that capability while in the house so before you come with that bullshit in the future, please remember, YOU don’t see everything. YOU also don’t know everything we know and observed.

Anyway, I needed to get that out of my system but I’m moving on. Some of the images today won’t necessarily match up to what I’m recapping because I have to work out of town today and I don’t have as much time. I collected a few images yesterday that CBS put out so I’ll use those in case you haven’t ran across them.

The day began with Kyle camera talking. He apologized for not being comfortable doing it yet. He doesn’t need to tho because hebwas hilarious. He just oozes energy for the game and it’s very contagious.

Nicole knew from the moment Ameerah hit the block, she was voting to keep her. She spent the day going back-and-forth with Terrance saying she didn’t know, would let him know when she decided, it was breaking her heart…(you get the idea) Daniel did this for a while too although he did eventually tell Terrance he was voting to keep him. (Daniel thinks it’s a sympathy vote)

This is such a bad decision as a player to go back and forth because all you’re doing is showing the person who stays, it was a tough decision for you. You don’t ever want someone you’re working with to feel like it was a tough choice to keep them.

Nicole went person to person hounding them, wanting to know how they were voting. She did this so she could later go to Terrance and tell him she had to vote with “the house.” Eventually, she told him she was voting him out and that she used to be a cop. (That’s 4 people she’s told so far) Indy told Terrance she “was voting with her heart” whatever the hell that means and Jasmine said she didn’t know either. Terrance will remember and it could make it easier for the Leftovers to get Terrance to vote the way they want in the future.

Brittany and Michael committed early to keep him but are still lying to Ameerah. Brittany asked Terrance about the Old Skool alliance. She didn’t ask about it by name. Instead, she said she’d heard rumors about an older person’s alliance. Terrance played it off as if it was a conversation, not an alliance. I was annoyed with Brittnay. I don’t fault her for looking out for herself and using information to do it. I just didn’t think the information was used strategically or at the right time. The Leftovers were planning on holding that info back in case someone like Daniel won the next hoh. (I still get nervous every time Brittnay and Monte speak)

It’s surprising Joseph doesn’t make me feel that way because he talks nonstop. He does a good job though and has continued spending time with the women. Ameerah pouted because Joseph had been giving Taylor a little attention but she got over it. Joseph even slept in Ameerahs bed last night but it was mostly to keep tabs on her so the Leftovers could have a meeting upstairs. Joseph also have the women convinced he wants to go after Turner.

The Leftovers main goal (mostly pushed by Monte) for the day was to get a 6-5 vote in order to confuse everyone. This plan has gone back-and-forth alot but they either want this split so they can avoid saying anything or if it’s 8-3, they plan to blame Nicole and Daniel. It seems like a little extra messiness but I understand it. Monte & Joseph and Michael & Brittnay are the most vulnerable during the next HOH. They’re the only people in The Leftovers who don’t have a bestie from the other side. I understand why they’re trying to camouflage their votes.

Kyle tried to join in on the late meeting but he couldn’t escape Alyssa. At first, I thought Kyle was saying he wanted Alyssa to be the next one out but didn’t really mean it. I think I’ve changed my mind. He honestly seems frustrated that he doesn’t have room to breathe. She’s either following him around or clocking every move he makes with her eyes. I’ve seen hg’s become infatuated with someone before but we’re entering levels of ‘girl, have some self respect.’ This was right after Alyssa trailed her finger from Kyle’s chest to his crotch. He jumped back and tried to to play it off as funny but he seemed frustrated with her.

Alyssa stopped harassing Kyle long enough to play Big Brother a little. She told Ameerah she wanted Daniel and Nicole out soon. She even mentioned hoping Taylor won the HOH to take Daniel out. Neither of them believe anything Nicole says anymore and they said Daniel is rude. (No shit)

I forgot to mention Turner being in the room when Nicole told Terrance she wasn’t keeping him. After she left, Turner told Terrance he was safe and he wasn’t leaving. To the extent Terrance believes everyone, he does know he’ll be staying tonight. Meanwhile, Ameerah, Danial and Nicole were worrying about Terrance having some sympathy votes. (Ameerah has plenty so she’s happy to give a couple away for the cause)

Kyle managed to escape Alyssa’s clutches for a bit and had time to talk with Taylor. He told her he was ok going on the block in order to take out Daniel. Some of the Leftovers (Monte) want Nicole out first but the decision will be made based on who wins the hoh, assuming they even win it.

A few other things:

Monte worked on Terrance more to get his loyalty after tonight. Some of the others did too but he may have the most success.

Turner told Taylor about Indy’s soup comment and she was also given more info about Jasmine. She seemed a little shaken by it because like we’ve been saying, she really hasn’t know the extent of it. (I wish someone would make it clear how much Alyssa has been involved too) Turner was so kind to her and said he wanted her to have the information but he didn’t want to hurt her with it. He asked her if she wanted to know things like that when they were said. It did hurt but she said it was better to know the truth.

I know everyone’s been on the Kyle and Joseph train this week (myself included) but Turner may be becoming one of my favorite people in the house. There’s been a lot of attention given to Kyle and Joseph for putting the alliance together and they deserve the credit. What’s gotten lost is the fact that without Turner, this house wouldn’t be facing concerns over how they’ve treated Taylor. He was the one who brought that out in the open to the other side of the house with his speech and his conversations afterwards. He also had to be willing to put his neck out and backdoor a big player for all this to happen.

There were more random conversations throughout the day yesterday but most of them won’t matter since Ameerah is leaving. I can’t wait for tonight! Have a great Thursday.