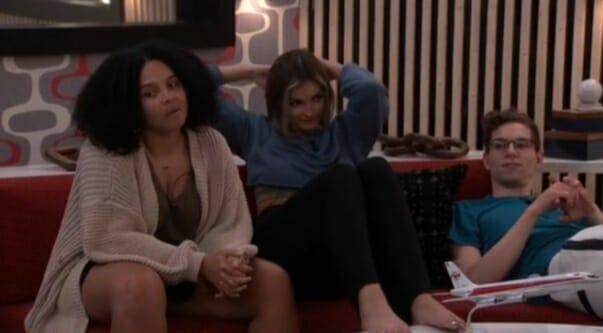 Good morning BB Junkies! Last night was a late one and at almost 8 am, (my time) the hg’s are just now going to bed! The night owl seasons make it harder to do a morning recap. I usually have to leave out some stuff for the sake of time on days like this but I’ll do my best.

I won’t spend much time on the daytime feeds yesterday but here’s the highlights:

Jasmine painted Taylor’s nails and Taylor looked genuinely happy. She knows Jasmine can’t stand her but it probably felt good even pretending to be included as one of the girls for a while:

There was ALOT of conversation about things Terrance has said. The cameras kept switching rooms every time his name came up. Apparently, during a domestic violence convo regarding a rapper, Terrance said something about women who stay deserving what they get. That’s by no means word-for-word and its based only off other people retelling Terrence’s convo. It also sounds like after Jasmine and Brittany pushed back against this, Terrence doubled down on it. (Not a great hill to die on there Terrance)

One lighter note, Joseph finally got the fly he’d been after:

He told the fly “whoever sent you, they fucked up.” He left it there and said it was a reminder to his friends what would happen to them.

Here is Daniel packing, I wonder how much of Palomas stuff he tried to cram in that suitcase as keepsakes:

Daniel giving what he thought was an iconic speech:

Reactions to his speech:

Daniel was evicted and Turner had another unintentional funny moment. It looked as if he was getting up and going towards Daniel, only to walk right past him after it was announced he was evicted. (As Turner would say, that’s fire!)

Another twist was announced and the wall comp began:

Brittany and Taylor got caught by Jasmine celebrating in the storage room. (Jasmine said she “caught them” but Brittany said they weren’t hiding it so there wasn’t anything to catch) Brittany is soooooo over Jasmine. Yesterday, Brittnay said she cleaned up some broken glass in the bathroom. She said Jasmine stood there and watched her but as she was leaving the room, Jasmine giggled and said “it was me.”

Others weren’t quite so happy about the win:

One more just for fun:

Ok, for real, the last one:

For real, for real, the last one:

Depending on how this new twist goes, this could end up being a really bad HOH to win but we’ll worry about that next week. For now, we celebrate!

I stole this image off Twitter. I’d credit the original but it’s been all over the place so I have no idea who to credit. (Sorry)

Turner messed with Terrance a bit and asked if he felt good about Taylor’s win. (Turner knows he’s scared) Terrance stammered and tried to say yes but he DOES NOT feel good about her win. Not only has he said a bunch of nasty stuff about Taylor, he couldn’t resist being a jackass during the comp too. Taylor was beside him on the wall and at one point said to him “you’ve got this.” He responded by telling her “please don’t talk to me.” (He also told Turner he’s had Taylor’s back since the beginning of the game)

Alyssa showed her ass too because while Kyle hugged Taylor, (the last 2 standing in comps like this always share an emotional hug) Alyssa said “that’s enough” over how long the hug lasted. (It wasn’t that long) She said it loud enough for everyone to hear. Later in the night, she started telling people it wasn’t meant in a bad way. (Sure, ok)

Taylor got her HOH key:

The Leftovers began discussing the best move for the week and Taylor had her one on one convos last night. Not everyone agreed which has been the usual for the LO’s. Taylor suggested putting up Monte and Turner as pawns which didn’t go over very well with her alliance. She also suggested Terrance and using Turner as a pawn. (Taylor’s only seen BB23 PLUS they’ve gotten used to the Bestie twist. I get why her line of thinking was going the wrong direction) Brittnay assured some of the LO’s that Taylor was loyal, wasn’t planning something shady and she didn’t mean anything by it.

Joseph may really feel a genuine connection to Taylor because he stepped up to take the attention off her screw up with his own. (kidding, it wasn’t on purpose) While the Leftovers discussed dropping the charade, Joseph pushed back. Kyle did too at first but eventually, he even got on board with the rest of them. Joseph said the other side loves him and he doesn’t want to ruin that yet. (Yes, Joseph, they know. Actual game players aren’t going to allow you to have that kind of advantage anymore) They were annoyed enough with Joseph that I think everyone forgot about Taylors original suggestion.

Taylor’s already said she didn’t want to be the person to take out Jasmine and Terrance is her target. Even though Jasmine put Taylor on the block, she said she’s not comfortable returning the favor. Taylor told Jasmine she wouldn’t put her up and acknowledged her birthday was this week. ( Like anyone could forget, Jasmine’s told everyone 500 times it was her birthday so she shouldn’t go on the block, she shouldn’t be on slop, etc. Yes precious, they should just declare you the winner now!)

Brittany and Michael, along with Taylor a little, have discussed the emotional manipulation Jasmine uses for strategy. She’s brought up her deceased father and her injury as reasons for no one to put her on the block. Yeah it’s bad but I don’t really care. Emotional manipulation is a real strategy IF you can get away with it. I’m just glad she isn’t getting away with it because no one’s buying it. Michael and Brittany would rather Jasmine leave over Terrance but know it probably won’t happen just yet.

Kyle talked to the cameras and said he tried as hard as he could for the HOH. He said he didn’t throw it and obviously we already knew this…he wanted that HOH bed! Joseph, on the other hand, said he did throw the comp. (Probably true because he’d said he didn’t want to win it)

Kyle and Alyssa talked about trying to get the target off the 2 of them and possibly get it put on Indy. He brought up that Jasmine and Indy are mean girls. (True but so is his girlfriend)

Jasmine and Alyssa stayed awake almost as long as everyone else, which is something they never do. Alyssa walked in on the Leftovers and HAD to be putting things together. Everyone that Daniel mentioned to her was in the HOH room. Although the mean girls are scared, it still wasn’t enough for them to play nice. They sat in the HOH room, had their own separate conversation and Jasmine even refused to respond when Taylor spoke to her. Jasmine also seemed to be fuming because Taylor was playing with Joseph’s hair. (Haha, Jasmine has a little crush of her own. It isn’t just Indy)

It sounds like the noms will be Terrance and Indy but it could change if the Leftovers have time to talk more after they wake up for the day. (They’ve gone to bed since I’ve been typing this) The goal for Taylor will be to take out Terrance but could change to Indy or maybe even Alyssa. Jasmine probably gets a pass for 1 more week.

Anything is possible this week tho and they’re all good targets for Taylor. If she made it to the end, I don’t see any of these 4 voting for her. Terrance will turn on anyone, Jasmine probably has the most pull with her group, Alyssa’s in a showmance and even Indy isn’t a bad target. She could care less about the game but I’d want to eliminate her as an option for people to drag to the end.

We’ll have noms later today so check back for those and have a great weekend!