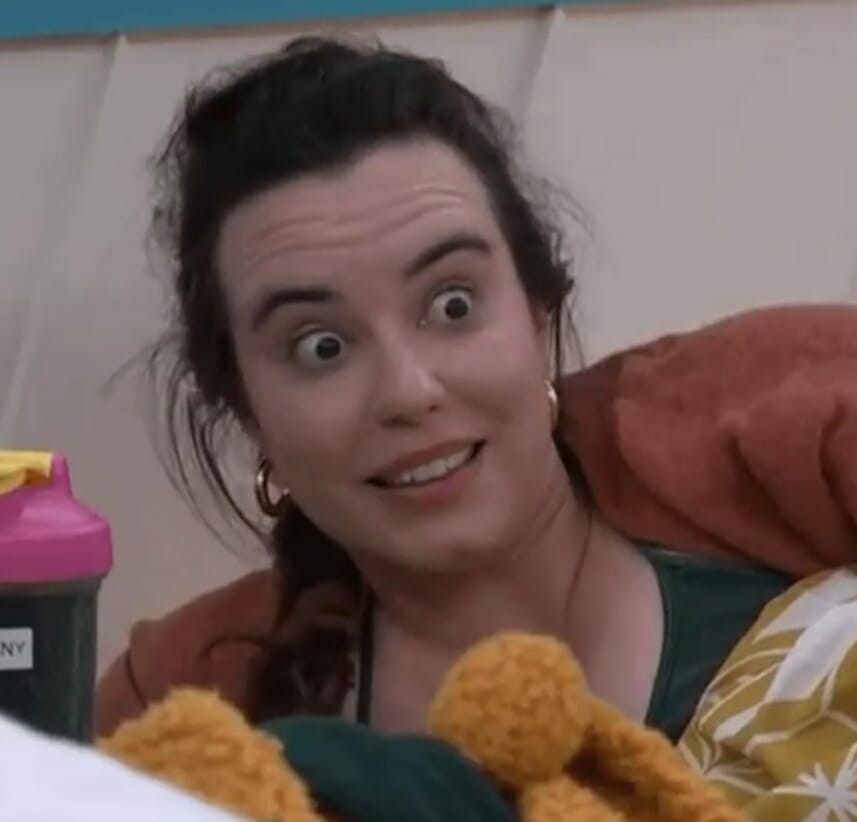 Good morning! Yesterday was a fun day because we were waiting for a few conversations to happen. Once we saw those, the day was mostly a wrap. It was a bit of excitement this week but I’m not expecting a surprise tonight.

In the morning, (actually lunch time) Taylor and Monte got out of bed. I’m not picking on them but they were the only 2 whose sleeping arrangements might’ve be questioned. There was some morning talk between Taylor and Monte that I don’t want to cover. (I’ve listened to enough about bears and snakes to last me a while) Just know, when Monte is in the hoh bed and brings up ANY kind of animal, you may see and hear things you don’t want to see and hear!

1st important conversation: Could Taylor flip Brittnay back to her side?

After the usual morning stuff, Taylor got around to talking to Brittnay. Although Brittnay looked like she felt guilty, I couldn’t tell if anything had changed after this talk. Spoiler….it hadn’t.

Taylor told Brittnay she’d spent most of the night in the hoh room mad at Monte for putting her otb and putting them in this position this week. She made it sound like she’d spent the night chewing him out. It seemed to pacify Brittnay, at least enough for her to spil a little info. Brittnay told Taylor she’d found out (from Alyssa) that Monte knew Taylor and Brittnay were going otb during Turners hoh week. She said, after Dyre Fest, the After Party group brought Monte in and said he’d known everything. (They don’t know Monte pushed for Taylor to go up because only Monte & Turner know that part)

Brittnay spoke to Alyssa and told her she needed to move past her own feelings and spend time with Taylor. (Remember, she’s decided Taylor has betrayed her) She said she’s still wanting to keep Alyssa but didn’t want Monte or Taylor to catch onto anything.

They agreed Alyssa should pretend she doesn’t have Brittany’s vote, work on Turner’s sympathy vote, tell this story to Monte and say she’d like him to break the tie and keep her. Brittnay also thought she could convince Turner to give Alyssa the sympathy vote. (I don’t think this strategy has ever worked in the history of the show and Brittnay isn’t the one to pull it off)

Brittnay asked Alyssa to tell her if she wasn’t going to get Turner so she didn’t ruin her own game and Alyssa promised she would.

Alyssa campaigned to Monte while he took a bath. She said she didn’t think she had Brittnay but was trying to get Turner, would like Monte to keep her and you know the rest…

If this plan wasn’t so obvious, I’d be saying Alyssa did a decent job yesterday. I will say, she worked hard for it while Taylor napped. If Turner was a better player, Taylor could’ve screwed herself yesterday by dropping the ball…big time.

Brittnay asked Turner if he’d said anything to Alyssa yet about her leaving and he said no. Brittnay said she hadn’t told her but thought she could tell Brittnay was keeping Taylor.

She tried to plant seeds about Turner giving her a sympathy vote so he could keep Alyssa’s jury vote. (She’s so thoughtful) She asked, “why is it a bad thing to put it on Monte and make him break the tie? Turner agreed.

Brittnay said she didn’t care either way because she was voting to keep Taylor and was only thinking of Turner and his jury votes. She actually slipped up in this conversation and said “obviously, I’m voting out Taylor,” when she meant to say Alyssa. They joked about both of them having such bad jury management.

Brittnay said she could tell from talking to Alyssa, he’d probably lose her vote and her friendship if he didn’t give her a sympathy vote. Turner told Brittany that Alyssa had already threatened it and he said it really pissed him off. (Was this when she realized it was a bad idea for Alyssa to use this against Turner?) Turner said he’d keep thinking about it.

3rd important conversation: What does Turner do with the info from Brittnay?

Turner went to Taylor and Monte and told them. He told them Brittnay was trying to flip the vote and Monte said he knew it.

Monte said he thought she’d do this and now, it was confirmed. (He had to be happy because he probably feels even more confident Taylor would choose him over Brittnay now)

They know that Brittnay is either trying to keep Alyssa or at the very least, trying to set Turner up to vote wrong and piss off Monte and Taylor.

Brittnay tried to listen from the other room to what they were saying. (Haha):

Monte asked Taylor if she was doing ok after finding out Brittnay was trying to flip on her:

After Monte’s bath and other grooming, he may have been ready to spend more time with Taylor:

They kissed goodnight instead:

There were also cinnamon rolls:

Brittnay thought she might have a fever and had Alyssa & Taylor feel her forehead. (I don’t know about a fever but she HAS to have a headache from all those wheels turning in there):

There was more talk about who they would and wouldn’t hang out with after the season. Alyssa won’t go out of her way to see Joseph, Taylor wants to know what Daniel and Terrance’s problem was with her and Brittnay said she won’t take anything personally. (Why do I NOT believe that?) Turner said he isn’t going to travel to see any of them. (Haha) :

Alyssa tried to dance again and Turner shut her down. Alyssa is a BAD dancer but she looked like he broke her soul. He said something about not thinking any form of dancing was entertaining WHILE she was dancing. (She stopped immediately) He’s still pissed she threatened to take her friendship away if he doesn’t keep her.

I agree, this is just a game and saying you’re entire game is “friendship” is stupid. Turner doesn’t take any of this personally so he doesn’t feel anyone else should either and I get it. On the other hand, I think everyone should enjoy dancing if they can, no matter how bad they do it. (I mean, come on Turner, stop being such an asshole!) Shortly after that, Alyssa asked him to talk and he told her to go take a nap instead. (He’s really over Alyssa’s bullshit)

There’s a joke in this one somewhere:

Luckily for Taylor, Turner seems set on going to a F2 with Monte. If he wasn’t, her napping and overconfidence this week would be sending her to jury. I’m not getting into how she should be handling Brittnay because I did that yesterday.

After all Britrnay’s messiness last week, Taylor said even if Brittnay had betrayed her, she was still going to try to get the the F2 with her. I’m wondering if that still stands. In a different cam talk, the morning after she made out with Monte the first time, she was talking about being known as the ice Queen the season. She didn’t say it but I wondered if she was insinuating that she’d cut Monte, even with the recent change in their relationship. I may be reading a whole lot of nothing into these cam talks and they’re just things I’m curious about.

I’m sure I won’t get what I want but assuming Alyssa leaves tonight, I think I want a Turner HOH.

After that, I’d like Taylor to win the veto and have to choose between Monte and Brittnay. I’m sure if she kept Monte, everyone would say she did it because of recent events. However, she could also make this choice because she felt betrayed one too many times. I’d like to think she wouldn’t evict Britrnay because it would be a stupid game move. No matter who wins the hoh, I hope its played in full on the episode tonight.

As for last nights episode, I liked this veto comp. Props to production for finally continuing a theme all season since it was called Snooze Fest.

Turners expression was the same as mine when Brittnay said “that’s for you Michael” or whatever it was that she said.

I like the concept of needing hg’s to be in the backyard by a certain time in order to compete and the middle of the night part. I don’t like it at all at the final 5.

For now, its Monte’s game to lose with a couple of exceptions. He could be evicted in the next round if he doesn’t win the veto. I also think something can be said for the story Taylor has this season. (I’m actually talking about the perception the jury has of her story) Even if she got to the end with Monte, I could see this jury possibly wanting to vote for her. (Everyone trying to get her out from the 1st week, surviving the block 5 times, having another female winner, all the questions they got about Taylor in exit interviews, etc) I don’t think it’s a given that Monte beats Taylor but what do you guys think? Have a great Thursday!