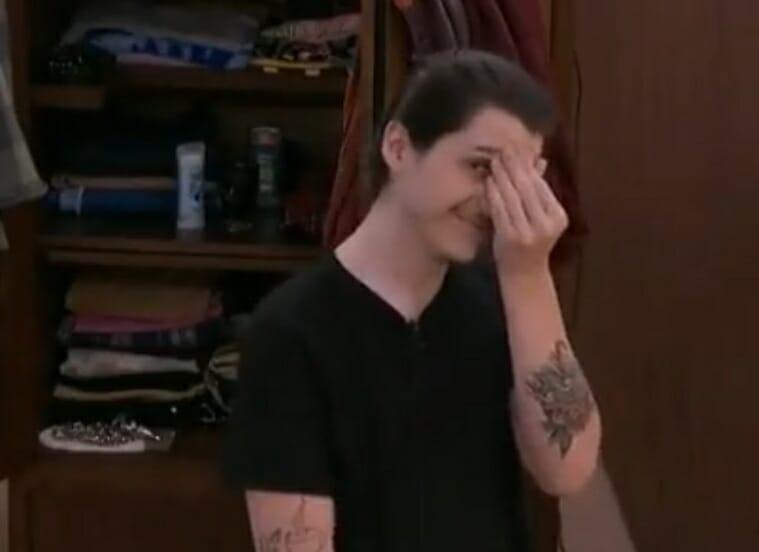 Good morning, we have a new hoh annnnd we already have the nominations too. This should actually be a shorter recap since it all happened so quickly. It’s shorter but later because I had to stop in the middle of it and take my dog to the groomer. Not that this has anything to do with BB but this is my baby boy, Jackson. I’ve talked about him before but to anyone fairly new: Yes, I had him before BB21. (He is most definitely not named after that Jackson)

I have the veto results at the bottom of the recap.

Back to why you’re actually here….As you already know, Taylor is our hoh at the final 4. (Congrats on making F3!)

This is close to where the day ended but I’ll rewind to earlier. Brittnay told Alyssa she was voting to keep her no matter how Turner voted.

Alyssa asked Turner to promise he was keeping her. He promised.

Turner looked at the cameras after she left the room and gave us this look. (He’s a menace, haha)

Turner could probably do well with a jury that was in season 11ish or before. I ran across this yesterday and it sort of says it all:

Everyone will say the way Turner handled this was stupid and even though he’s been my fave this season, I definitely agree. I enjoyed it very much but that doesn’t make it a smart decision. In fact, it was a terrible one. Getting rid of Alyssa was a bad game move and the way he did it was worse. I think I had this same expression while I was watching this exchange between Turner and Alyssa:

Brittany followed through with her plan and you could tell in this moment, Taylor knew Brittnay tried to evict her. Regardless of what came later in the night, Taylor knows.

I though this HOH comp was different, to say the least. I don’t know about you guys but I hated it and kind of loved it at the same time. I can’t explain it further.

Taylor barely beat Brittnay as both had terrible answers to the tiebreaker question.

It didn’t matter how bad Taylor’s answer was because Brittnay’s was worse. The best part about Taylor winning the HOH for me was the fact that Brittnay had just tried to evict her. (Hilarious!)

Turner got to work telling Monte he hoped Taylor knew he kept his agreement with her and voted out Alyssa. There was some talk between them about what a terrible friend Brittnay was to Taylor. (Ya, from the guy who promised to keep HIS friend and then voted her out) Hypocrite or not, I do still love those pants of Turners!

Brittnay didn’t waste any time telling Taylor she was the one voted to keep her. (Yep, this is the path she’s chosen) They just moved on to “needing to take out one of the guys” and “Turner needs to go.” Last week, when Brittnay tried to blame things on Taylor, Taylor cam talked and said she didn’t care, she still wanted to take Brittnay to the end. I didn’t know if that would still be the case, after Brittnay doing it again and actually voting to evict her. I guess it is because Taylor said to the camera last night, she needed Turner to go. (Taylor’s trying to get to the end with Brittnay if she has to drag her there, haha)

Taylor had to have her one on ones and was told she’d have to do her nominations last night. She met with Monte and was honest about wanting to keep Brittnay. She’s trying to convince him to vote out Turner if he wins the veto.

Turner got emotional when he talked to her. He doesn’t want to admit Brittany may have outplayed him and cost him another jury vote. I think it’s easier for him to call Brittnay a bad person and ignore the lies he’s told and mistakes he’s made.

Taylor told Brittnay she and Turner would be going on the block. She also talked to her about about trying to take out Turner this week. (It sounds like Taylor’s nom speech involved there being 1 vote against her and not knowing which one did it) Brittnay said she knew the noms didn’t matter but still tried to get Taylor to put up Monte and Turner. It didn’t work and she let it go. Brittnay asked Taylor what she would do if she won the veto and Taylor said she would pull Britnay down. Brittnay said she would evict Turner.

Turner was still mad at Brittnay and tried to confront her about her vote. He said he thought it was slimy that she tried to use his friendship with Alyssa to get him to do a sympathy vote.

He didn’t think it was a respectable move on her part to use this to try and take out her own friend (Taylor) either.

He also knows she’s going to try and blame the vote on him which he feels is even more slimy. He asked her if she had any thoughts on the situation. Brittnay said “thanks for your comments” and walked out of the bathroom. (Haha)

You know what it’s like when you’re so pissed off at someone, you want them to engage and they won’t? He was sooooo mad and it made it so much funnier! He headed to the HOH room to tell on her.

He went over the conversation to Monte and Taylor. Turner’s entered the phase of “we’re the good people” which I don’t care for at all. He’s either too loyal to Monte, thinks he can beat Monte or has let his dislike of Brittnay affect his game decisions.

I don’t blame him for not wanting to work with her becaus she’s spent the past 2 weeks trying to get him evicted. Here’s the thing tho, he’s spent this season playing a more cut throat and emotionless game. If he’s going to do that, he should do it all the way. In the older seasons, (where they ignored everyone’s feelings) those players would’ve teamed up with the devil if it got them further in the game. I don’t see this happening with Turner.

I expect a week of hearing what a terrible person Brittnay is from both Monte and Turner. (No Monte, we haven’t forgotten about the 2 hour lecture you felt necessary to give Brittnay) If she wins veto and kicks him out, it will be his own fault.

Taylor is actively trying to get both Monte and Brittnay to make a move that is NOT good for either of them. If she can pull it off, great. She’s also getting too sloppy with the shomance. They’re sneaking kisses in rooms other than the HOH room. (Bad idea!!)

She’s told Monte that “no one can know” but now that she’s HOH, I can see her getting a little too comfortable. Sure, she’s in the final 3 but if she doesn’t win that last HOH, she’s gonna need someone to take her to the end. Turner or Brittnay could still change their minds about it if they find this out. I don’t know what will happen, but I do know, it shouldn’t be worth the risk.

Monte waited until Turner and Brittnay were asleep before leaving his bed and going up to the HOH room. Unless they plan to get up early than usual, I’m not sure what this is supposed to accomplish.

Either Brittnay or Taylor winning the veto probably makes for the most exciting week. If Taylor wins it, does she let Brittnay cast the vote, knowing she’s still lying to her? Does she let Monte do it and trust that he’d evict Turner? If Brittnay wins it, who does she vote out? It should be Monte but will she see past this feud with Turner?

Brittnay made a mistake by not coming clean last night. Taylor already knows so she should just tell her she knew Alyssa was her only chance to win. She could say she’s sorry and that she knows the most she can do is 2nd place now. Tell her, she wants that 2nd place to be with Taylor winning. She could swear on everything that she will evict Turner. (Ya, she’s just screwed, this sounds terrible even as I’m typing it) Her game is soooo bad right now. It’s like she’s playing poker but she has her hand of cards facing out.

Alyssa’s post eviction interviews are starting to roll in. Here’s a preview of one:

I cant wait for the veto results!

Monte won the veto. (Boring week ahead unless Brittnay gives us some unhinged activity)

Have a great weekend.