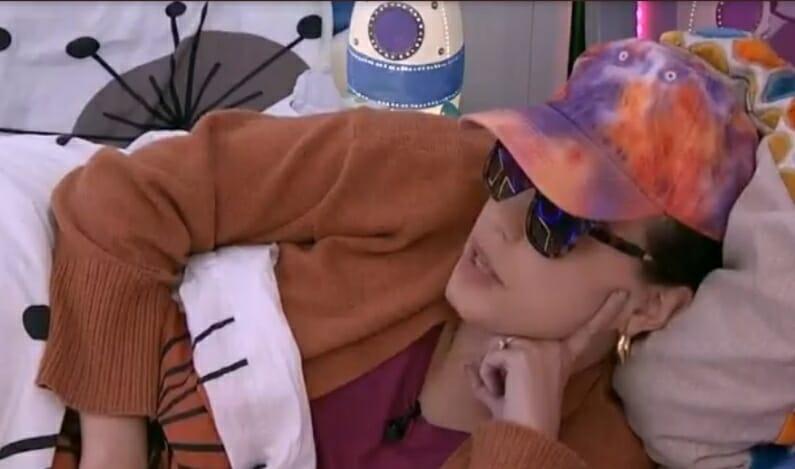 Good morning BB Junkies! This should be a pretty short recap today. At this point, there isn’t very much happening. I don’t know if there will be any point in doing one tomorrow but I’ll do a quick one if there’s anything to discuss. I’ll also do some kind of rundown for each of the F3 and their games. I don’t expect any surprises but I’ll wait until we actually have a F3 for that one tho. (Sorry I never did the thread for the jury but they’ve just not given us enough to go on this year)

Last night was the last of the backyard. They were told they’d lose it this morning. I’m assuming they were told Monte would vote someone out on Thursday too since they’ve stopped waiting for a veto ceremony.

Brittnay went to the HOH room and woke up Taylor. (not on purpose) She brought her M&M masterpiece, wrapped up in a blanket to Taylor and said “I’ve got the goods.” (Haha) She apologized for waking her up and said they could talk later.

Brittnay finally gave Monte her pitch without Taylor and without the diagram. He’d asked if she wanted to talk and I think caught her off guard. She’d also realized it wasn’t a good thing to do and would only feed into Monte’s concerns over how well she knows the days.

She gave him the pitch about Monte always beating Brittnay in comps and her stats, just without the M&M’s. She told him he may not beat Turner in a F2 and said Turner had an impressive BB resume. It went in one ear and out the other as expected. (I appreciate her not giving up tho) He told her about the Pound and how Taylor had offended him the day before. (eyeroll here)

Monte’s main point to Brittnay is what we already knew: Maybe he gets to the F2 easier on his own against her but he gets taken to the F2 with Turner either way. Brittnay tried to create some doubt and said maybe Turner makes a big move since he likes big moves and doesn’t take him. Later, Monte told both Turner and Taylor about Brittnay’s pitch.

Brittnay cam talked and apologized to her husband since she’d promised him she’d bring home the money to start their family. (arrogant promise imo) She said she didn’t think Monte’s game was all that impressive and said Michael had protected him thru a large part of it. She’s hoping she can go to jury and turn everyone against him. She’s going to try to sway the jury to vote for Taylor if she can get to the end. (Brittnay doesn’t realize she won’t have the time she thinks she will. She’ll go to a hotel Thursday and join the other jurors at the roundtable, that’s it)

Brittnay talked to Taylor and told her not to piss off Monte and give him a reason to take Turner. (not those exact words) She said she doesn’t think Monte can beat Turner in a F2 and unfortunately, probably has Taylor convinced she can’t either. Brittnay said if Michael had listened to her and either took out Monte or Turner, they wouldn’t be in this situation.

She told Taylor about Monte telling her about the Pound. She knows they’ve had a deal for a long time and doesn’t think Taylor will be able to get Monte to take her. She also reminded Taylor she’d been trying to tell both Michael and Taylor for a long time that Monte and Turner were closer than they thought. (This is very true)

Monte asked Taylor how she was doing and she said fine. (I guess he thought she should be crying) He asked if she needed or wanted to talk. She said he was welcome in the hoh room anytime he wanted if HE wanted to talk. He asked if he could shower up there. She said yes so he brought up his toiletries, the ones he’d removed the day before and showered.

After, they layed on the bed, cuddled and talked a mixture of game and how to fix Taylor’s personality. Monte said he liked the way she was sometimes. He mentioned she was warmer when she wasn’t in power and colder when she was in power. (It’s called hohitos and Monte had it too) Taylor FINALLY told Monte she didn’t want to change who she was and felt good about her ability to let people know who she is but appreciated him talking to her about it. Basically, she’s apologizing if she’s hurt or offended him but doesn’t want to have her personality changed. (good for her)

Monte promised he’d take her to the F2 over Turner. He said he’d never told Turner he would take him they way he’d told her. (Not true, he just hasn’t said those exact words this week) Taylor gave reasons as to why Brittnay would be easier to beat again and Monte disagreed. (I’m with Monte on this one. After seeing Turner in action during the last veto, it would take a miracle for him to win part 3 of the hoh) Monte said he felt good about Taylor winning part 1 and him winning part 2. (This debate is over ya’ll)

There was more tie dying and Turner even broke down and talked to Brittnay a little. He still appeared miserable and confirmed it when Brittnay got called to the DR. He mentioned two people being locked in the hoh room, with he and Brittnay roaming the house alone. At one point Brittnay even said “just send me home already.” They said they didn’t get why it had to drag out for so long. (Neither do we guys, neither do we!)

Eventually, all 4 played cards outside since it was the last night to have the yard. Taylor made a comment wondering if this was the coolest final 3 ever. Turner pointed out they were still the final 4. There seemed to be an immediate reaction on Brittnays face, as it would’ve mine too. (I wondered if in that moment, Brittnay changed her mind about trying to get Taylor the win, lol) Taylor admitted she was just thinking about herself.

As for the Monte and Taylor drama, I said yesterday, I could see why Monte was irritated about the headphones. (He still overreacted) He was also annoyed by a comment she made about his goddaughter and I can see that too. He said something about watching her grow up the past year and Taylor said, it wasn’t really a year since he’d been in the house for a few months. He said something about her being 1 and being a toddler and she said a 1 year old isn’t a toddler. (Turner agreed with her but he was only mad at Taylor)

Taylor does this alot and it reminds me of my son, when he was around 4 or 5 yrs old. For example, he’d ask the time, I’d see it was 8:58 and respond “Its 9:00.” He would look at the clock and say “actually, its 8:58.” (When he discovered the word “actually,” he became a menace!) It was annoying but also funny and cute at the time. It was ‘his thing’ at that age. Everything was sooooo literal! It isn’t funny or cute when you feel like an adult is constantly doing that to you tho so I get it.

However, they ALL have annoying traits. My issue over this isn’t whether or not Taylor can get on someone’s nerves. (Yes, she can) It’s about the way, she isn’t allowed to screw up, ever and she hasn’t been all season. Everything she does wrong and everything she says wrong, people have hung onto it and analyzed it.

Think about some of the things Indy said while she was in the house. What about how obnoxious Jasmine was when she was constantly asking people to do things for her? What about the way she criticized HOW someone did something for her every time? What about all the nasty comments Terrance made about people, mostly Taylor? Who’s actually called out Brittnay when she’s been all over the house, driving people crazy? People were annoyed by these things but it never turned into a ‘we need to fix this person’ situation.

I’m with Steve about the crazy Twitter narrative that Taylor is perfect. She isn’t. (It’s not new tho, they have someone they worship every season) I just don’t like seeing her being held to a higher standard than the other players in the game. This has happened with the houseguests (especially Monte) and some of the viewers. I hope everyone (on here at least) can see, that’s the only point I’ve ever tried to make about Taylor.