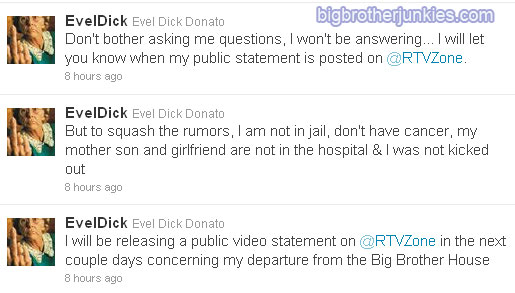 Dick Donato broke his silence last night that really ended up raising more questions than it answered.    First, I am relieved to hear that nobody is in the hospital, that was definitely a concern among the big brother community.   However, if nobody is sick and he wasn’t kicked out, why the hell is he not in the game?

Was this all a big opportunity to give his daughter a boost to the final 10 in addition to promoting his website?   Was it just a big agreed upon publicity stunt by CBS for ratings?  Was Rachel just that annoying?

I’m going to rule out the CBS publicity stunt because (unless he’s going to lie) he wouldn’t be making a video explaining it in the next few days.   I doubt he did it for Daniele, because the golden key is by no means a golden ticket to the finals, and he could have helped her a lot more by staying in the game and casting a large shadow over her.   Rachel was obviously a joke, but you never know lol.

While I’m glad he’s going to eventually clear it up, I do have to roll my eyes at the shameless promotion of his website in the process.   This whole thing stinks of a marketing ploy on his behalf to promote RTVZone.  I guess we’ll find out, but I’m not sure I’m going to fully believe whatever he says in his video either.