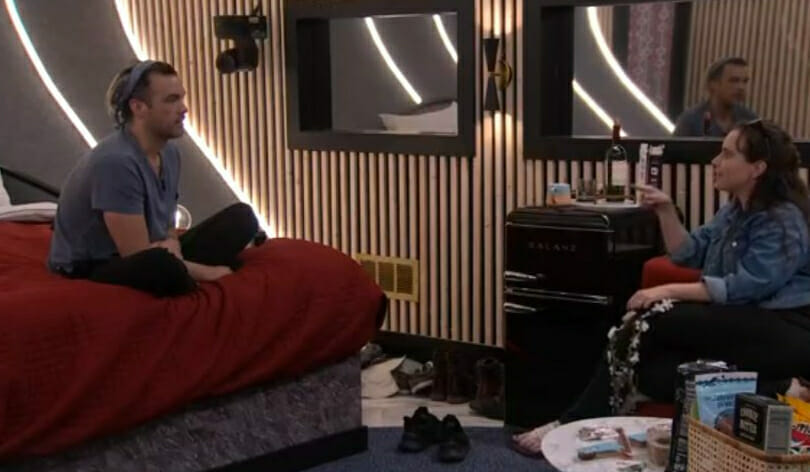 Week 1 is well underway and it’s been full of getting to know you chatter and a ton of whispering.

But before I begin, if you’re a feed watcher and want to contribute random updates when you’re bored, reach out to me here. I have the feed update system going. It’s not perfect yet, but it’s there and working. Working on that the last few days has (ironically) kept me from posting a lot of updates, so I’ll just recap what’s been going on.

Everyone wants Taylor gone. The end.

That’s not entirely true, but Michael was Daniel’s original target, however, when he won power of veto this week, there has been a ton of scrambling on who the replacement nominee is going to be and Taylor’s name is being whispered a lot.

Now, you’ll hear them say the reasons are because she wore her finale dress today and let it slip ‘this is what I’m going to wear on finale night’ showing *gasp* confidence, but I watched it and it was definitely far more innocent than that. Taylor loves the attention and dressing up and modeling is literally what she grew up doing in pageants so it’s how she expresses herself. This had zero to do with overconfidence and more to do with just being bored.

Plus, her name has been thrown out there a ton before today, so there’s that.

Another possibility is Indy and that’s because she hasn’t spoken game with anyone. Brittany has a theory that Indy is only there for fame and her version of ‘winning’ is just getting more exposure, and she’s probably not wrong. That’s been the motive for like 75% of the cast throughout the teen seasons. Casting was pretty much people going to bars and recruiting the best-looking people they found (seriously, they were so bad at casting. How did the show survive?).

Regarding general house direction, we have a bunch of different alliances going on (of course).

I don’t really remember the names because they’re usually stupid, but here are the general groupings…

I’m sure there are other pairings that are slipping my mind, but it seems to be either gender-based or duos so far…. with Taylor and Terrance basically just floating around. (and Indy. She’s technically in the girls but that alliance is fragile and not lasting long)

Tomorrow is likely an off-day for the house, but the backstage thing could come up at some point. I could be completely wrong, but Pooch may be forced to pick one of the three as a third nom and they’d probably just save that for after veto so they have more show to fill on Thursday.

I’m out for the night. Again, contact me if you want to do updates. It’s great if you’re an overnighter or Mon-Thur person because those are my bad times. Have a good night!