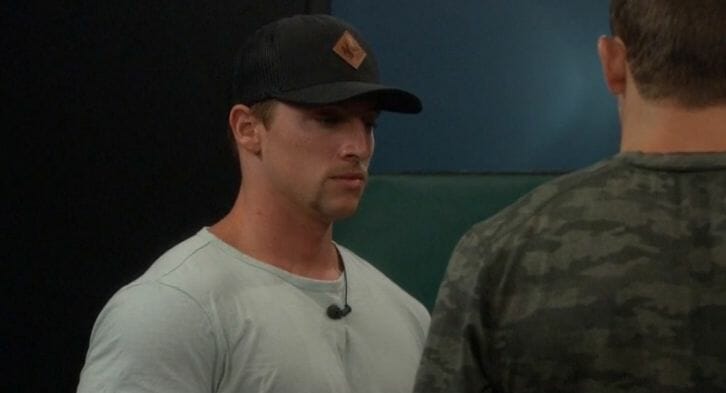 Happy Saturday, everyone! Another beautiful day out there (I assume. I’m not sure where you live, but it is summer!).  It’s going to possibly be an interesting night in the Big Brother house as the bros are nominated and there aren’t very many options to save them both.

Mel has the weekend off, so I’m going to fill the overnight report with possibilities for the week and how things could shape up.

Brett and Winston has obviously been nominated. Scottie is the HoH. This means the three of them are guaranteed to play in the POV today. Scottie is telling his side of the house that he wants to keep nominations the same, so that knocks off a chunk of people who may use the veto should they play and win. Looking at the remainder of the list, here are people who could use the veto:

First, the fact that the entire list is female backs up Scottie’s reason for nominating Brett which is that he’s friendly with all the girls in the house and his charm could easily push him to the final 3 once he passes the tipping point where he’ll have the numbers regardless of who is HoH.

Second, I’m sure you’re wondering why Sam is on that list. That is because Sam told Scottie last night she would be a pawn so she can use the power before it expires. That’s a pretty terrible reason to actually use the POV should she win it, so I think she’ll easily be talked out of this if it happens. Chances are very slim this one plays out.

Kaitlyn is always a wildcard looking to make a splash, but I think Tyler will easily tell her not to use it. Both Sam and Kaitlyn will volunteer to be pawns should anyone else end up using the POV, however.

It’s hard to determine where Kaycee stands because she’s basically a decoration in the house. She rarely speaks, and when she does, it’s not usually game talk. I don’t see her as being very close to the bros, so it’s unlikely that she’d actually use the POV knowing that someone she is closer with (again, no clue who that is because she’s a decoration) would go up. She’s on the list, but very unlikely.

That brings us to Rachel and Angela. The unspoken third and fourth ‘bro’ from that group. The two girls and the two bros have a four-person alliance that isn’t confirmed or named, it’s just there. They’re the closest group of four in the house which means anything can happen should one of them play and win. Scottie will likely tell either girl that should they actually use the veto, their counterpart will be the replacement nom which means it will be a tough decision on either of them. Chances of either of them using it on Winston are slim to none. The big question is if Angela or Rachel like Brett more than they like each other. I personally think the answer is they do, so I’ll put them as a strong ‘maybe’.

Here is how I see today going…

To save Brett, one of the following people need to win PoV:

To save Winston, the following people need to win PoV:

This means Winston at best has a 17% chance at saving himself today while Brett has a 17-50% shot depending on who the other three people are to play.  Seeing as Winston can only really count on the two girls as options, he’ll likely pick them as houseguest choice. I am fairly sure there are 3 houseguest choice chips in the bag (one for each nom and hoh) which should mean Brett and Winston both have a 36% (ish) chance to draw Angela, Rachel, or one of 3 HG choice chips from the bag. Pretty decent odds compared to the 7% chance to pick someone else.