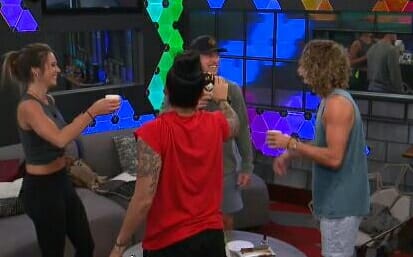 Good morning! Wow, that was a long veto comp. I think the feeds were down for almost 10 hours. Honestly, I gave up, went to bed and got up early to review what happened. Kaycee won the veto last night so things should go exactly the way Level 6 wants this week. Brett’s already guessed the battle back will probably be this week so they won’t be surprised by it. I don’t have as much to cover since we didn’t have nearly as many hours of feeds but I’ll recap the things we did see.

I’m pausing for a minute to discuss a pet peeve of mine. I agree with JC on this one. He’s definitely one of the best floaters I’ve seen play the game and I’ve seen every season. Like most post Rachel players and players who’ve only seen a few seasons, they equate floating with a lack of comp wins and being a “loser.” For the record, Victoria was a coaster, not a floater. She didn’t have her hand in any pies and rarely knew what was going on. Her game was to stay out of everything and simply survive. Sam is a coaster too. Floaters are heavily involved in the game, they just avoid showing it so they dont take the blame. JC is a floater and so far, he’s an excellent one. Jun, who won BB4 was also a floater and amazing at it. Rachel Reilly equates winning comps with playing the game so if you arn’t winning, you’re a floater/loser.  She gave floating a bad name and it’s always annoyed me. She HAD to win comps because her social game sucked! I can respect the way she won but I also respect (probably more) a player who doesn’t have to win a comp. If you HAVE to win in a particular week, especially early on, you’ve done something wrong in the game and not covered yourself from all angles. That’s why being a floater can get you into trouble as the numbers dwindle. There are less people to pick from and if you arn’t very careful, you become expendable.