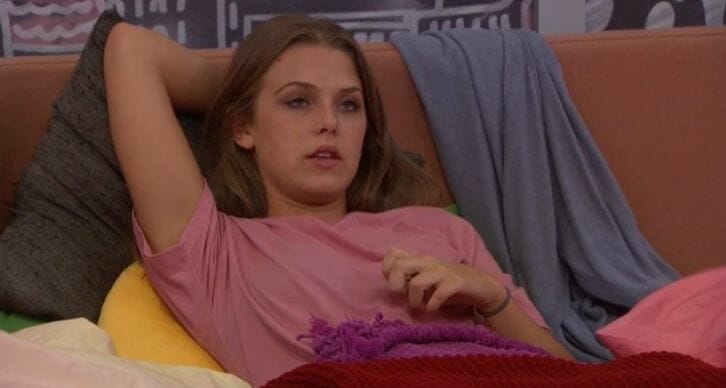 Good afternoon, everyone!  It’s veto day in the Big Brother house and I still can’t decide how I feel this week.

What we do know is that either Haleigh, Kaitlyn, or probably Rockstar (if the first two win veto) are going to walk out the door on Thursday night. We also know that Sam plans to tell the final 2 noms that they will have a chance to return on Thursday night after they’re evicted. What we don’t know is how realistic that chance is. Vegas on Twitter said that it should be a puzzle competition that the person has to solve the puzzle and I’m sure it will be in a set amount of time. I have no idea how difficult the puzzle is but I really anticipate it being fairly easy because they probably want it to be successful. The point of giving someone the ‘chance’ to come back in is to have the person come back in. It’s not good TV if the person leaves quietly never to be heard from again.

This doesn’t guarantee the person succeed. It is a puzzle and they are being watched by millions. It is very easy to draw a blank and completely choke on something very easy when the pressure is there. Ask professional athletes who train their entire lives doing things like catching a football tens or hundreds of thousands of times in their lives only to drop a key pass in the Super Bowl.  Considering Sam is going to tell them in advance may actually do more damage as they’ll have nearly a full week to wonder what the competition will be and overthink anything they go into.

This upcoming week will most likely be focused more on the two people nominated stressed about the chance than actually campaigning to save themselves.

In another note, Fezzy, JC, and Rockstar have been picked to play in the veto along with Sam, Kaitlyn, and Haleigh

check back for updates