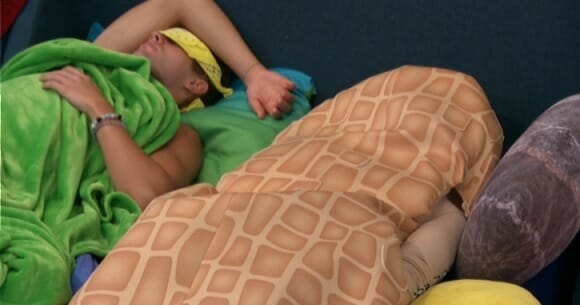 Good afternoon, everyone!  It’s Sunday Sunday Sunday in the Big Brother house and the first full day of punishments for Brett, Kaycee, and Rockstar!

If you weren’t aware, Rockstar has to listen for Jessie to come over the speaker and give her instructions on a food to make and a workout to do (Jessie from BB10/BB11). Meanwhile, Kaycee has to sit in a peanut costume and do a small workout when the peanut song comes on, and Brett has something to do with a granny. I’m pretty sure it will be like Rachel’s punishment where the feeds go down while someone comes in the house.

On the flip side of the veto comp, Angela got the veto, Tyler picked a trip to Hawaii, and Scottie got $5k.  There was a little drama after the competition – some staged, some real – because I’m pretty sure Tyler won the competition and had final pick but chose the trip instead of the PoV which is a huge nono when you’re on the block. This pissed off Brett as he was the one holding the trip to Hawaii and he showed he was mad to JC and crew. When Tyler came in the room, Brett pretended not to be annoyed by it, but we all know he had to have been – at least a little. I understand Tyler didn’t want to take Scottie’s money to further cement his fake alliance, and by taking the trip from Brett, it helped isolate Brett more in the house which should help him moving forward, but it’s still a bit painful.

As a strategist, it’s actually really brilliant for Tyler to make such an obviously dumb move and it’s even more impressive that he came up with it during the competition. I’m not quite sure what he gains by making it look like he’s working with Angela as she promised to keep him safe, but it does wonders to help cause a fake rift between him and Brett while putting a larger target on Scottie’s back. People like to pretend that Scottie is the ‘evil genius’ of the house, but level 6 is playing chess while the rest of the house is playing checkers. The only thing not going their way until this week was the lack of competition wins.

Alright, time for some afternoon updates that will take us to the CBS show in 6 hours….