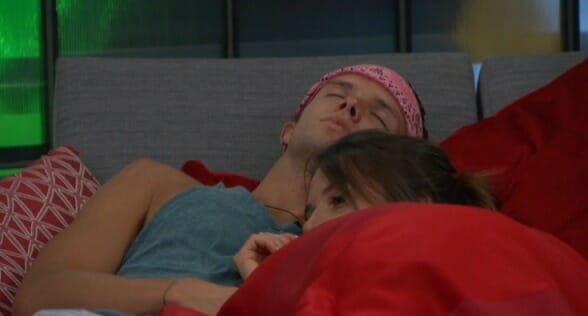 Sunday, Sunday, Sunday! This is the fifth to last Sunday in the Big Brother house which means winter is coming. Boo! I’m sad now.

Enough pity party from me. On the flip side of the argument, there is still nearly five weeks left of the season!  That’s like half a season of BBOTT (I think).  Speaking of, please bring that back. Scrap the dumb Celebrity BB and just have a regular winter season. We deserve it after the mess that production made this summer (short endurance comps, no hoh on feeds last week, super long pov last night). We also deserve it because Big Brother is better than most garbage that CBS ends up airing, anyway.

On to the show. There isn’t a lot to talk about considering the PoV ran like 50 hours yesterday and cut away feeds most of the day. When feeds finally returned around 1:30 am (my time), people were ready for bed and just waiting for have-nots to end. Tyler and Angela did snuggle up a bit around 3 and talked about going on a date when the season ended. He offered to take her to Hawaii (he won the trip) and they talked about other places they’d like to go. Despite what they may be saying in the DR right now, I have a hard time believing they’ll turn on each other at the end. For selfish reasons, they will probably hope the other gets taken out before the final 3, but if they’re in the final 3 together, I just don’t see them not taking each other. Maybe I’m naive. Tyler especially. He seems to like Angela a bit more than she likes him and he knows he can probably beat her. I’m not sure if she feels she can beat him.

The end of the year also makes me want to thank people once again for their donations this summer! Now that website costs are taken care of, donations are split between Mel and myself (although I may change that moving forward to giving her most of the remaining donations minus a cup of coffee here and there). Here is the page if you’re interested!

Let’s get to the feeds…

Slow afternoon but I’m probably going to wrap this up and create a new thread after the CBS episode.  I may just have to talk more about their boring conversations to fill the time because game and drama has been extremely limited recently