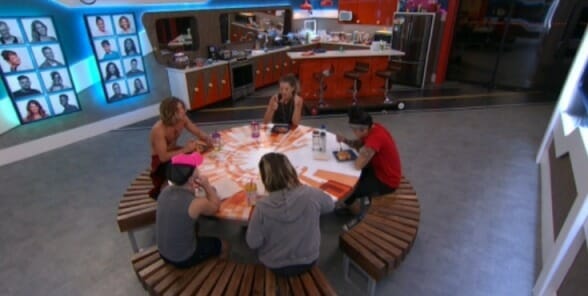 Just like that, we’re down to 5. Lucky for us, 4 out of the 5 were some of the most boring people this season so that should make the next two weeks fly by. Right?  I know some don’t think Tyler is boring, but he is. He’s a good guy, good competitor, and an average player, but he’s boring as hell.  And yes, I put him only as an ‘average’ player after tonight.

What was he thinking with his absurd backdoor speech? I can’t believe he actually went along with Angela’s dumb ‘one and two step ahead’ comments rather than stand up and explain why he did what he did. “Brett, you said that you were going to come after Angela, so we had to clip you first”. JC and Sam would have picked up on the alliance, but who cares at this point? They can’t win comps even if they want, so the remaining L6 are going to steamroll through the rest of the season and end up in the final 3.

Speaking of: Angela won the HoH

Here are the numbers for the remaining players:

Yes, that is a combined 17 comp wins to Sam and JC’s combined – 1 – comp win. In addition, Sam has been nominated as many times as the entire L6 alliance at this point.  Good stuff

JC and Sam will almost certainly go on the block and it’s extremely unlikely either will win veto.  Flip a coin who goes home then it’s rinse and repeat with Sam getting the boot. The only chance I think we have for any excitement is if Angela and Kaycee turn on each other because I don’t see Tyler turning on either of them. I’m not sure if he thinks he can beat Kaycee in the final 2, but it’s possible he does think that. Tyler is giving off a serious Paul vibe with his million f2 deals and people are not going to be impressed by that.

In other news, the schedule will indeed be what I predicted a week or two ago.  Feeds will likely go down sometime Tuesday and won’t return until Thursday night.  Eviction will be taped Tuesday and air on Wednesday with the final 4 on Thursday. We get 6 days of the final 3 staring at each other before the season ends.  Sad way to end a really good season, but I guess that’s to be expected.