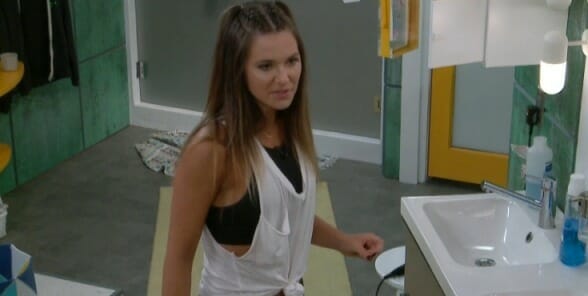 We have a new HoH and next week is indeed Double Eviction. On a random note, in a season that looked for sure to have an all-girl final 5 when they were ahead by 3 numbers after the 3rd eviction, girls have finally re-taken the lead after their 4 straight evictions. I know it’s a random observation because there is no guys vs girls thing happening, but I’m always interested in seeing how the genders play out

It’s hard to say what will happen this week….

Just kidding. Haleigh will probably be walking out the door next Thursday and Sam if she wins veto. Week over. See you next Thursday.

Another fun thing, we’ve now had the 9th different HoH this season!  By comparison, at this point last season, we’ve had 7. Many other seasons recently have had two HoH’s so I can’t count those but 9 is pretty rare.

Alright, let’s get into feed updates because I’ve killed enough time and the feeds are up

Ok, heading to bed. Sam and Haleigh on the block tomorrow but I’ll be here to cover it!  Recap in the morning