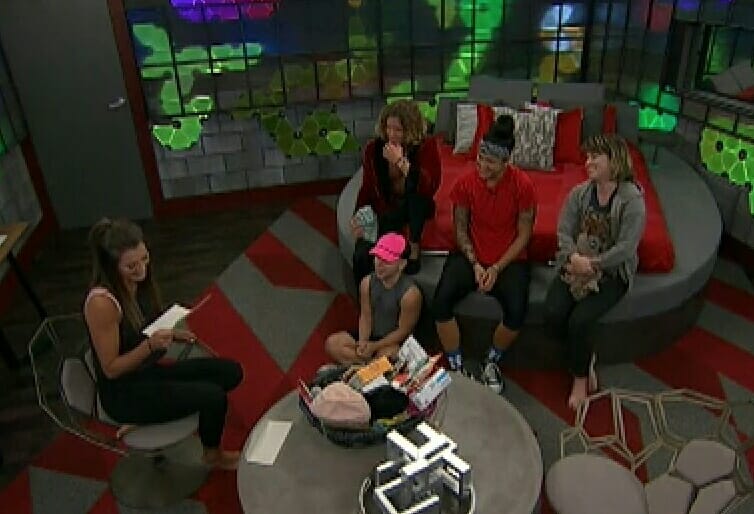 Good morning! I have that hungover feeling I sometimes get after a double eviction. Did everything happen to create the most drama? No.  Would it have been more exciting if Brett had saved JC with a veto or Tyler had been forced to choose between KC and Angela with a veto? Yes. However, the world hasn’t ended and the game is still fun. I like drama and excitement too but we’re simply past that stage in the game. This season has given us plenty of funny characters, bad game play and everything else. We aren’t going to get it all the way to the end. I’ve been entertained watching Foutte stumble around in the dark but we get to a point when the bad players are weeded out and we’re left with the good ones. (If we’re lucky because we’ve had some bad players in the F3 in the past) It isn’t all that exciting but that’s how it goes with most games.  The best players win, right?

If you’re a diehard Rockstar or Foutte fan, then ya, your season’s pretty much over. If all your hopes and dreams were centered around Brett winning, yours are too. Go ahead and find a hobby until the fall line up of shows start. Who else is tired of people clogging up our social media pages to announce to us that they hate the season and “they’re done?” Fine, it’s your choice but I don’t need it announced to me every day. Go do whatever it is you want to do and let the rest of us enjoy BB in peace.

I understand when someone who only liked Foutte or Brett isn’t having a good time.  The people I’m surprised by are the ones who think Tyler, KC and Angela are playing the best games and who don’t want Sam or JC to win but are pissed because this is the final 5. You can’t have it both ways. If you want one of these better players to win, they have to stay in the house for it to happen. Sorry, that’s how it works. There’s also a trade-off to the fun we’ve had this summer. We’ve seen one of the best alliances in many years!  They gave us blindsides and shocked faces all the way back to when most years, they’re “voting with the house.” We had one of the worst but most entertaining alliances of all time too. Here’s the tradeoff: An alliance that good is going to wipe out the other side, so near the end, we see a steam roll. We have to give something to get something people! (It always shows when I’ve been annoyed by Twitter idiots, sorry) Ok, enough of that, let’s go over Thursday.

There wasn’t much happening on Thursday before the live show but I’ll go over what little we saw, the double and the late night feeds at the bottom. (In case you just want to scroll down to see what happened later in the night)

Daytime feeds:  The hg’s watched the videos and studied for the comp. I noticed JC took a nap and Sam cleaned the house after they saw them. Angela and KC studied in the hoh room. Brett came up to help and gave them wrong info on purpose. They knew it was wrong and didn’t correct him. Later, Tyler came up and told them Brett had done it on purpose. Brett did his real studying in the storage room. The hg’s went over the order the comps were played which didn’t help them at all during the hoh comp.  Tyler had to go upstairs to study because Sam kept trying to talk to him. She was going over crucial game related things like a list of the ways Fessy annoyed her. She also had a detailed chat about why she chooses to sit under the stairs. Here’s a pic if you need a Sam fix because I’ll talk about her as little as possible in the rest of the recap: 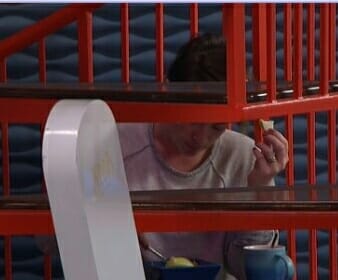 Late night feeds:  They had the next hoh comp which Angela won. It was questions, I’d imagine because KC said something about buzzing in quickly to get Sam and JC to buzz in too. She said she was playing defense and doing blocking for Angela.

The final 5 having dinner: 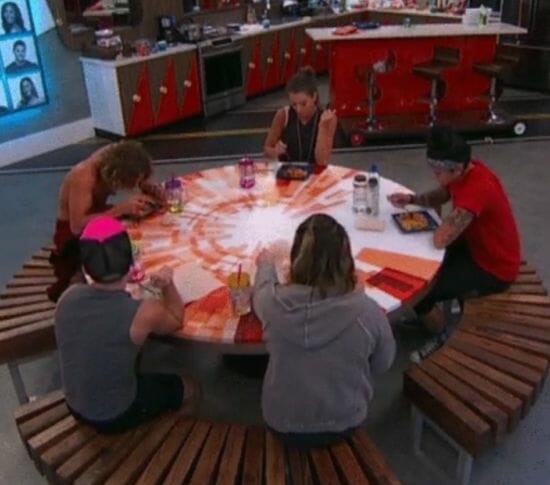 I’m sure I’ve missed some things from the feeds last night but I’ve had several things slow me down and I’m bordering on being late for my work appointments. I’ll end this with 4 opinions that I can talk about in more detail later. The feeds will be down some this week so we’ll need things to talk about anyway.