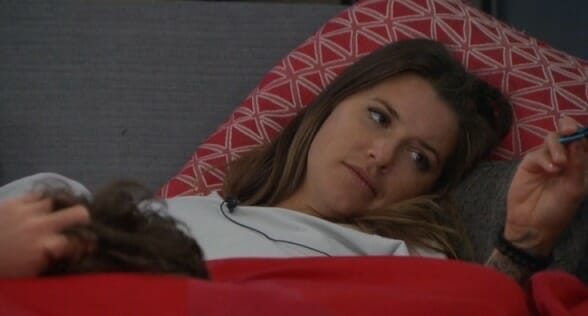 Why do these past two weeks feel like we’ve been in a perpetual state of final 4? Fessy is done with this week and we may see a repeat next week unless he or Haleigh win the HoH this Thursday night which at this point I may be rooting for just for #teamfunfeeds.

I really like being right when I make predictions and either of them winning will completely throw off my final 8 order but I’d rather be wrong than have another week of .. this.

Don’t get me wrong, it’s not entirely boring. Seeing Tyler get his new hairstyle was fun and there was a little drama with the broken intercom, but the most game talk this week consisted of JC’s increasing paranoia about the future of the house. He told Tyler that Angela probably has to go soon which is a bad idea, but he doesn’t realize how close the two of them actually are. He also feels Brett can’t make the final 4, and to his credit, he’s right. Brett is quite possibly the favorite to beat anyone in the final 2 once Haleigh and Fessy are gone (while Brett has had a better game than either, there is a bitter jury).

Tyler can talk about how he was the mastermind, but the only thing the jury will think of are the broken promises he has made (similar to what Paul went through). Meanwhile, Brett has his incredible eviction night speeches and probably won’t continue to shit on players with his GBMs as they leave the house.

Let’s get to some updates…

Site Update – I added messaging back for now. If you receive any spam messages talking about weird stuff, please contact me and I will look into it. I am looking to see if I can set it so only friends can send messages to each other