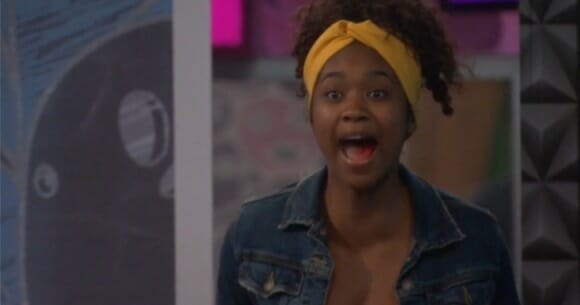 Before I begin my post tonight, I want to say BOOOOO to CBS for not showing granny tonight. I’ve been counting down the days until I can see granny give Brett a bath and it’s been stripped away from me for at least 24 hours. My night is ruined. My week is ruined. My year is ruined!

I kid, sort of. I am disappointed, but they’ll have time to fill tomorrow

Alright, let’s talk about the hacker and the house meeting. Holy. Shit. Around 12:20 pm, Haleigh told RS that she was the hacker and mentioned how she wanted. This gave RS an injection of something because she became super hyper and helped egg Haleigh on to do it.  During the meeting, Haleigh decided to mention the incorrect story how Tyler wanted Bayleigh to backdoor Angela which caused Tyler to laugh then deny it. Bayleigh heard him deny it and absolutely lost it on him. She started screaming at him louder than I’ve heard anyone scream in that house and really in general in a long, long time. She freaked out so much that she literally bit her tongue or her lip which caused her mouth to begin bleeding mid-scream (see image above).

For those wondering, here is how the real story went. Tyler went up to the HoH room after he won veto to get a feeling of what Bayleigh would do if he used it. He didn’t get the chance because she immediately told him that she didn’t want him using it so he had to switch it up to plan b. Tyler mentioned the powers and asked what Bayleigh would do if someone actually had a power to pull someone down, who would she put up. And after saying that, Tyler asked ‘Angela?’ as a way to dig for info and not a suggestion. Bayleigh nodded and said yes because in her mind she thought Tyler was actually suggesting she do that and she didn’t want to.  Tyler didn’t clear that up today because he’s still working on another part of that strategy which is to pretend to be best friends with Scottie.

There you have it. Today’s bite your lip argument was a result of miscommunication and a touch of Haleigh’s secret that made Tyler think Bayleigh betrayed him. Awesome, right?

Pretty slow night in the house so I’m going to wrap it up early and go to bed. Update in the morning!