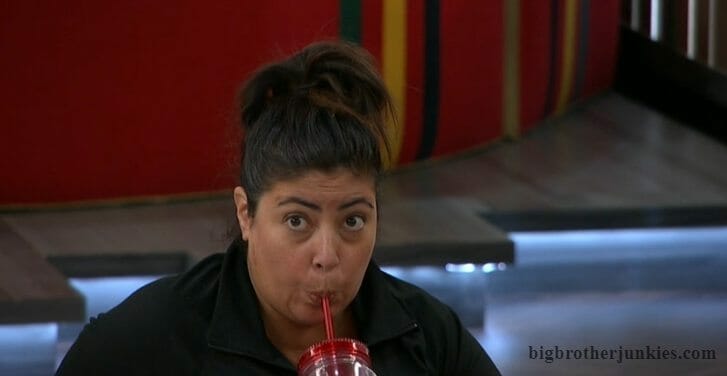 First, I want to say that I hope all our friends and family in the path of Dorian are safe and sound this evening. It’s the storm that just won’t go away and we’re expecting some remnants of it up in New England over the weekend.

Alright, you may have noticed that posts have slowed a bit the last week. That is a combination of it being incredibly slow in the house and me starting my semester. The blame definitely falls more on the slowness than school because the beginning of the semester is always easy. What isn’t easy is trying to find stuff to write about when the house sits around and plays backgammon all day. Live blogging Big Brother is easy, live blogging backgammon tournaments isn’t.

There was a little campaigning this week but it’s pretty much a sure thing that Jessica is leaving tonight. The big question will be who will follow her in the double. There is a very good chance that it will be Jackson or Christie depending on which side wins HoH, but this is BB21 so that means Holly could end up walking because that’s just how this season has gone.

Seeing as this is one of the last big traffic nights with plenty of eyes on the blog, I want to give everyone a huge thank you to those who have donated this season. I also want to thank you on behalf of Mel and NK who have also received donations! Here is the link to donation information

Here we go!  First some brief highlights before first eviction

Julie tells the house there is no battle back this year, then tells them it’s a DE night and (shocker) Tommy is overdramatic

(if it’s a house vote I’m going to puke)

At least make Jackson break the tie you wimps. Jesus.

They have to build a puzzle hockey rink then when it’s built, shoot the puck in the net. I play hockey and love puzzles. I’d never go home if I lost this comp

Typical BB21 move. The nicest person in the house wins HoH the one time when she doesn’t get to enjoy it the entire week.

From Cliff’s brief conversation with Nicole, Tommy and Christie are going up

Tommy and Christie are on the block

Veto is coming up next

(I saw the question in comments and it’s a good one. Yes, Nicole will receive a basket and letters from home. She just doesn’t get the room)

It’s ‘what the bleep’ competition. This is actually one of my favorites. I love how they do this.

Cliff is going to keep noms the same he told Tommy

Christie has been eviction in yet another unanimous vote

The next HoH competition will be later on tonight. It likely won’t be aired live on the feeds but I will create a new post when the results are in