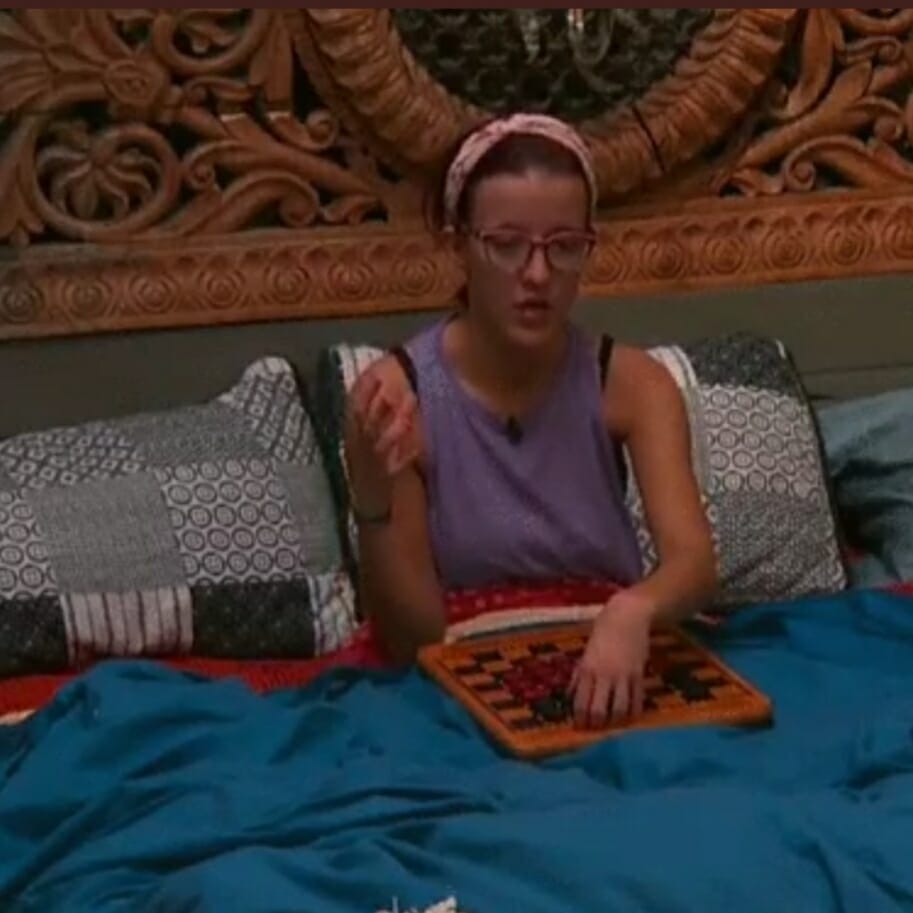 Good morning guys and gals. It’s another slow one for me today. We always know this is coming and it still stinks when it happens. This is one of the worst kinds of casts to have for any chance of things staying lively. I’m not knocking their personalities (for once) but I’m referring to the vibe in the house. This has been a cast that’s tried to create the family atmosphere. We see it every few seasons and it makes the end game so much slower. Instead of continuing to strategize, they sit around taking walks down memory lane and telling each other how close they all are. It is what it is and like I said, it isn’t unique to this season.

I don’t have much to go over and the last couple weeks are when we’ll begin taking small conversations, trying to see what we can read into them and making predictions. Most of the time, we’ll be wrong but that’s part of it too. Good times!

We still aren’t sure about the delay from Thursday night to Friday for the hoh comp. Cliff spoke to his wife (thru the camera) and mentioned his asthma attack during or after the live show and Beth being sick. They normally wouldn’t postpone a comp because someone is sick but with two of them, that may be the reason.  Originally, I thought they may have had some set issues with the comp build but if it was the movie themed Q & A comp, that isn’t very complex. Whatever the reason for the delay, it was delayed and once the comp was played, Jackson was the new hoh.

Swaggys social media didn’t help the confusion since he sent out a Tweet on Thursday night saying he was backstage and about ready to host the comp. At least we know the delay wasn’t  planned and I didn’t think it was a big deal. Julie had already said they were hosting so he didn’t give anything away. Yesterday,  he tweeted out the winner of the hoh comp before the feeds came back on. People seemed outraged that Swaggy had the nerve to do this and I kept thinking, really? We were going to know in a couple of minutes anyway so who cares? (I’ve said this about Jackson and it applies to Swaggy. He gives us plenty about him to dislike, is this the hill we’re really gonna die on?)

Anyway, Jackson won the hoh and from what Swaggy tweeted, it doesn’t sound like it was even close. He put Cliff and Tommy on the block so now we just wait for that to play out. They’re guessing or have been told (who knows) its BB Comics and we know they’re correct. Almost everyone planned their strategies for this one yesterday. It may not help any of them because they’re so focused on the zipline part of the comp, they’ve forgotten there wasn’t one last year. Maybe it’s a zipline, maybe it’s not. One thing we do know is the feeds will probably be out for a long time.  I’m going to shut my BB brain off for a while today and go do something else once the feeds go down.

Here’s some of the random things that were talked about yesterday and believe me, they’re random. NK has more of them in blue boxes in the comments on the last thread too. (NKs are also better):

Yes, it was absolutely meant to make fun of the others and they talked about how funny it was going to be when they said it. I don’t blame Beth and Tommy for lying about that anymore than I blame Cliff for saying he didn’t mean them.

I do have one bone to pick though. I don’t know if anyone else has noticed but Beth says, (often) she has PTSD over something and the something changes frequently. I get it, it’s just something she’s stuck on like “literally.” It’sthe same way people overuse bullying or saying they have OCD(OCD is not a description for being organized and cleaning a lot btw) I hope this is addressed with her when the show ends and she stops doing it. It irks the hell out of me. I’m also aware this is my problem, not hers but she’s also the one who’s so image conscious. I know many people who’ve served our country and been in war zones around the world, witnessing things humans should never have to see. I also know a few who actually suffer from PTSD. (I’m not saying this is the only cause of PTSD) I’m just saying, NO Beth, you don’t have PTSD,  I hope you never do and I wouldn’t wish that on anyone. (Sorry, rant over. This is one of my triggers and unfortunately, I don’t have any watermelon laying around to comfort me so I rant)

To sum up yesterday:

I don’t know what you’re hoping for today with the Veto but check with Steve later to see if you got your wish. Have a great Saturday!