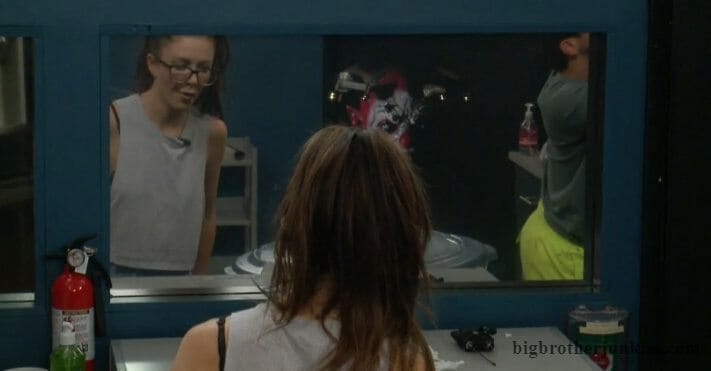 It’s been such a slow period in this house that clowns have been appearing in the mirrors (see photo above) and I am not sure if it’s for HoH or just to stir these people up a bit. It is likely going to be questions on this week’s HoH similar to how they thought they were getting bird questions last week.

The veto meeting was held today and as expected, it was not used. That means Christie or Nick will be going to jury in a few days. Unless of course they have a jury battleback or a reset week with the prank. Julie usually tells us of double evictions or things like that but fans are so desperate for some type of shakeup that they’re hoping she didn’t as a ‘prank’ to us as well. I’m a little more cynical and expect nothing major to happen this week, but I hope I’m wrong.  Double eviction weeks are usually fantastic and they are running out of time to have one.

As far as who is going, right now it’s certainly going to be Nick and I don’t think that will change. To his credit, he has been trying to sway people and there are some good arguments to keep him, but as I stated a few days ago, Holly and Jackson really have to get him out at this point. Or at least keep pushing for Christie and let the house flip. It’s just awful jury management if they go back to back weeks promising a pawn safety only to flip after they were ‘sure’ about the other person.  For people like Cliff and Nicole, it’s really a coin flip. Christie or Nick will still be close with Tommy. They’re basically the same person with one major difference is that one has another ally they can sway if they stay. That is Jess with Christie.

Nicole has been trying to push for Nick to stay but she’s not very good at making strong cases for people. I mean she usually has good logic but I don’t think people take her opinion seriously so it’s disregarded.

Regarding the clowns, here is a clown scaring Tommy so even if this is just for HoH, at least it will be fun over the next few days (if it continues). Freak these people out a bit 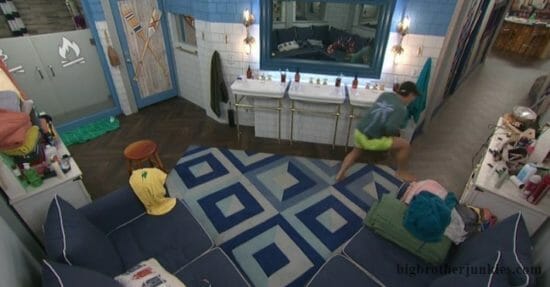 With that, I’m off to bed. Updates tomorrow!