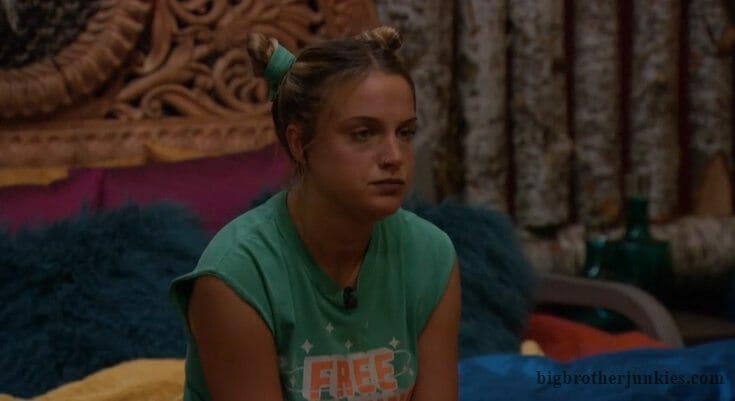 It’s Saturday night and the veto competition is complete! Zingbot was in the house today but I haven’t heard any of his zings yet. They should end up talking about them at some point so I’ll update when I hear them.

The big story is that Jackson won the veto competition which means I have no clue what is going to happen this week. Holly wants Nick to go, there is no doubt about that, but as I mentioned in the previous thread, she also has America in her head. If you noticed on Thursday night, Holly looked a little weird when voting. That is because she heard the gasps in the audience after voting out Sis. This threw her off and prevented her from doing the shoutouts she wanted to do. She’s been stressing about that vote since that point because she is terrified of being hated by America. Jackson? He doesn’t seem to care. For what little Jackson cares about our feelings toward him, Holly more than makes up for it.

That could play a huge factor this week in who goes home due to Nick winning a power from America. I am not sure she’ll want to risk being the person to send him home a week after turning on her friend who she thinks may be a minor celebrity outside the house (referring to Sis. The house wonders if Sis was a well-liked celebrity because of that gasp). Nick also happens to be Holly’s nominee so she has control over the replacement nom if she removes him. She’ll have no control if Christie is removed, so that move is unlikely.

With Holly and Jackson running the house lately, they really need to think about their jury management and right now it’s been poor. They likely lost the vote of Analyse and Jack after last week promising her safety then flipping. They promised Christie she’s no the target this week so if they flip on her, it’s not a good look for them at all. The least damage they can do this week is just keep noms the same and try to get Nick out regardless of what America thinks.

4:45 pm – Christie is up in the HoH room while Nicole is spending some time with Nick. That Nicole/Nick thing is weird. Something I haven’t talked about much this season but I’ll try to touch on it later on

Christie leaves and Cliff is still there.  He (Cliff) begins talking about how his alliance with Jackson and Holly and then says ‘I’m not going to tell Tommy that he’s out next’ then Tommy walks in the HoH room. Not sure how much he heard

Holly says she can’t take two shots at Nick and miss both times. She needs him gone

5:55 pm – There is nothing going on in the house. These clowns aren’t even talking about zingbot. Ugh.

9:00 pm – Long time between updates because there has been nothing going on tonight. This summarizes the feeds: 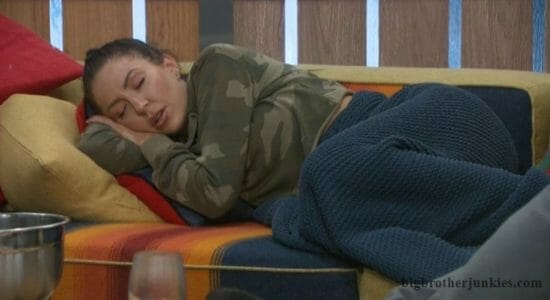