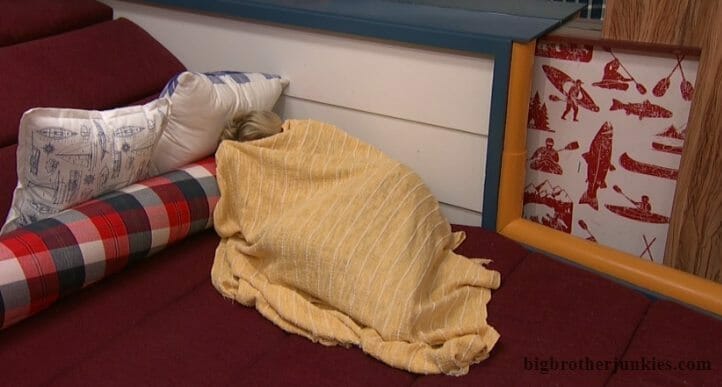 This is a combined recap and a Saturday thread because there wasn’t a lot going on last night plus veto will likely consume a large chunk of today.

Yesterday, Cliff and Kat got nominated together for the second time this season and for the second time, there is a solid chance they will both survive the week. Last time it was because Ovi was backdoored, but this time is because Christie was backdoored – by America. Now, there is always a chance that she, Tommy, or Nick can win veto and save her, but if they don’t, there is a very high probability that she is the second person walking through those jury doors. Considering how much they showed Jack when he left, there is about a 0% chance of a battle back this year. So, when they’re gone, they’re gone.

Christie thinks it’s terribly unfair that America got to jump in like that, and that is one of the most accurate things she has said all season. I’m not a huge fan of Christie, but she is playing this game very hard and it’s always a bit frustrating when a twist jumps in and screws people. I like the strategy aspect of this game so I hate the twists and I also hate the luck HoH competitions like we saw a few nights ago. On that note, Christie was given a huge advantage by knowing Tommy before she came in the house, so I guess the twist kind of balances that out a bit. Can’t really pretend you got a double when you started the game on second base.

The veto competition is pretty big today for the reasons mentioned above. Right now at least 1/3rd of the people playing would keep Christie safe and that goes up a little higher if Nick is picked to play (I think. I am still not even sure what Nick would do). If Christie is safe, that means Cliff’s time in the Big Brother house is about to come to an end because the chances of Kat going over him are slim to none. I’m pretty confident that either Christie or Cliff will leave this week because there aren’t many other options. If Cliff or Kat save themselves, I don’t see anyone else being a larger target than Christie at this point. No matter who Tommy replaces them with, Christie is still likely gone.

Sometimes the veto is pointless. Sometimes it’s not. This is one of those weeks where it’s going to play a huge factor in determining who walks out that door this week. Stay tuned!