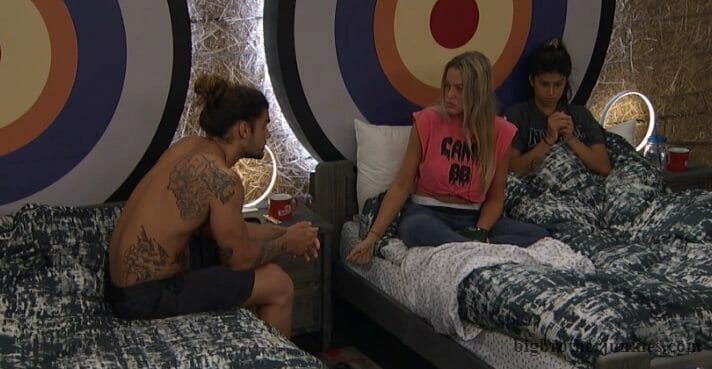 It’s eviction day in the Big Brother house, but unlike typical Thursdays, this one may not be a quiet one. While I don’t think the votes are going to get flipped, Sam’s effort to stir the pot before he left is going as planned.  I don’t think anything he does will save himself because the house is full of floaters who are just trying to make it week to week, so even if Sam actually does flip someone like Jackson, he still won’t get Cliff, Nicole, Jess, etc.

However, Jack did the Jack type of thing and eventually told Christie all about what Sam has been saying about her which gives us the possibility of fun feeds today!

10:30 AM – Jack is sitting down talking with Christie about what Sam said.

He tells Christie that Sam said she’d use the power and pretend Jack and Jackson were bullying her. She says that’s a complete fabrication. Christie was going to pretend to be Nicole and act bullied? 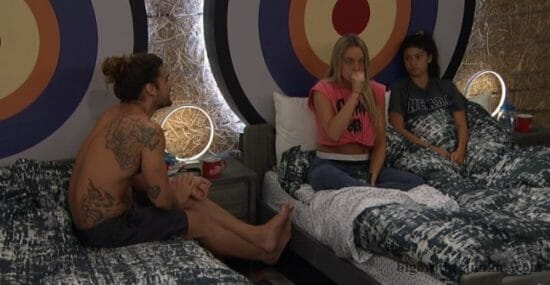 Jack says if he won PoV, it would have been okay and Jackson would have gone home (true). However, since Jackson won, they had to sidetrack the plan. She says it would have been funny if he actually called her out on it but he wouldn’t because he knows he’s a liar. She then calls him a Puuuuusssyyyy.

“His poor wife. He’s not even a man. He snapchats people with injuries on the side of the highway. You’re a loser” – Christie about Sam moments after saying she was just going to read the bible all day

She starts ranting how he claims a bed first in the havenot room and doesn’t give up his bed for a girl. He’s a pusssssy. She then wants to go change her goodbye message to a bible quote

Christie then spends the next 20 or so minutes venting to anyone around. Holly. Sis. Tommy. She’s furious about what she heard but is trying to bottle it up. Unfortunately, Sam didn’t come out with this sooner (like before veto) because it would have been a much better week.

1:05 pm – Feeds back. They were on HoH lockdown. Everyone still alive so Christie didn’t kill Sam while locked up

Holly and Jackson are in the HoH room talking about Christie. She tells him to keep playing nice because Christie doesn’t know they’re on to her. He says he’s going to put her on the block if he wins HoH. Looks like I know who I’m rooting for tonight

Jackson leaves and Holly begins reading her letter to the camera. The sound you hear is thousands of live feeders turning off their feeds now 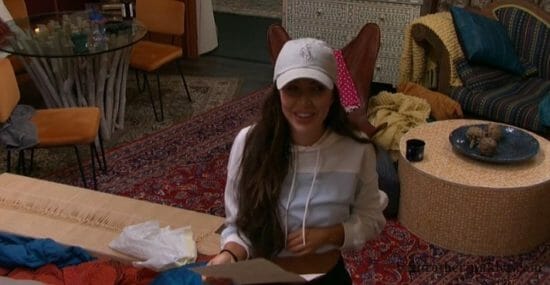 1:30 pm – Christie is upset because she doesn’t like when people say things that make her look like a sneaky person or someone who isn’t nice – lol

She leaves and catches Sam. He tells her it’s only a game and he loves her. She heads into the bedroom and talks to Tommy and Sis about it. Tommy tells her if something blows up, just keep cool. No matter what happens, just know that they have her back (Tommy is really trying to damage control with crazy Christie)

House is now all getting dressed and getting ready for tonight

Random breaking news – Rudy Boesch from the first season of Survivor has passed away. RIP. 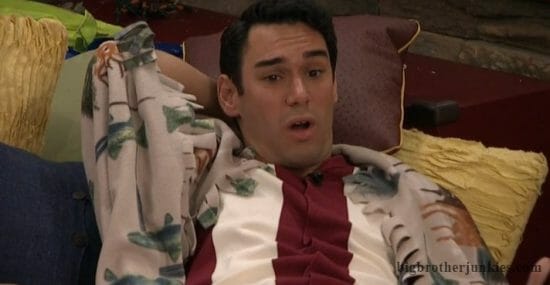 Jackson leaves and Jack immediately says “I can’t trust him. I want to trust him, but I can’t”. Tommy says ‘let’s flip it. If you save Sam’s life he’ll be with us’. Christie comes in and Jack tells her that Jackson has been trying to flip the 6 and get everyone against Christie. Jack says that Sam never had his Christie conspiracy theory until he had his one on one with Jackson. Oh boy. Jackson now made it all up? lol

Christie asks how they (Jackson, Holly, Kat) know each other. They talk about what they’ve heard. How Kat and Holly worked together on Stagecoach (whatever that is). She asks if they have the votes to flip against Kat and count (Tommy, Christie, Jack, Jackson, Nick, Nicole).  Jack says he’d die for Christie. He’s going to feel so stupid.

So, will a flip happen tonight? It will be pretty hilarious to see Kat volunteer then go home. It will also be great to see another week where the initial two targets are safe because this house is full of clowns. I’m going to wrap this post up and get started on my live eviction thread to summarize today.