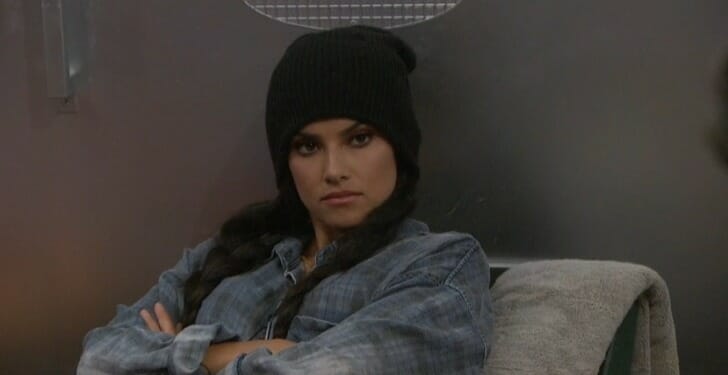 Yesterday was the first full day of the live feeds (get them here!) inside the house, and it was quite the snoozefest. A large portion of the day was consumed by the veto competition which everyone spent the night complaining about because it was ‘too hard’. It was apparently the competition where you catch stuff falling from the sky (the one tailor-made for Fessy and Kaycee), and Kaycee actually hosted.

Sam emerged as the winner which helped the plan this week continue its course. He is likely going to save Cliff and Christie will be forced to nominate someone else. As of right now, she’s going to nominate Kemi who will be evicted. However, doubt began to circle the house last night because Christie doesn’t actually have a problem with Kemi. Jessica also mentioned the race issue when talking with Nicole, and if she brings that up to Christie, it could actually alter the entire week. To be fair, she’s not entirely wrong. I’m not calling anyone a racist, but the optics of it all are not too good.  It already didn’t look great when three of the four ‘banished’ from the house were David, Kemi, and Jessica (who is Latina). Now with David gone first, it will look weird to give Kemi the boot second.

Again, I’m not calling anyone a racist – although it’s always possible – the optics are just not too good. I’m well aware that skin color shouldn’t give players a free pass, either, so I’m not taking that route.  David sealed his own fate by not winning the competition, but the house may want to think about how it may look if/when the only two black people on the show are booted first and second. Especially when you consider that Kemi has done nothing to warrant the backdoor approach. That tactic is typically used on people the house really want to get out asap, so it’s just really not a good idea at this moment. I think Christie may see that and have second thoughts on her re-nom.

I try to avoid discussing issues like that because it’s a very sensitive topic in the country and I don’t like to bring outside social issues into the game talk. I’m only bringing it up because, in this situation, it could (and probably should) impact the decision making this week. The fact that Jessica mentioned race on the feeds shows the house can be generally aware of how that may look.  The big thing here is that early in the game, people don’t have much to go on when evicting players which is why skin color is highlighted so quickly. Personally, I would evict the girl who cried in bed all day mentioning a few times how she wants to see her friends again (Kathryn). That would be enough for me to get my vote until strategy actually settles in and lines are drawn.

I’ll be creating a live update thread later on, so check back!