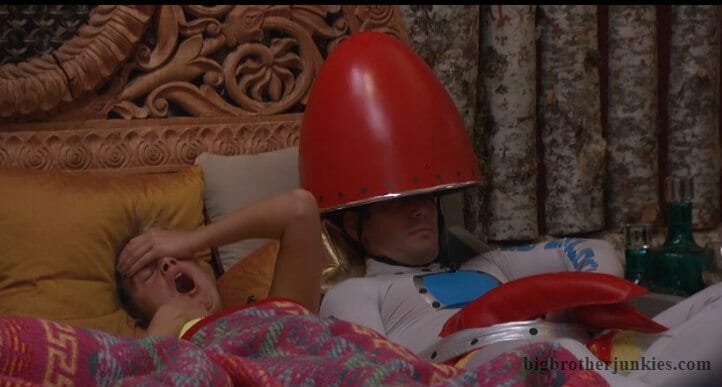 Fairly slow day on the feeds today other than Jack planning his next attack which should take place tomorrow. He is planning on going the blackmail route by telling Kat she has to vote for him or he’s going to reveal her dirty dark secrets (which aren’t either dirty or dark, but hey….). He plans on telling people that she knew about a flip vote and also that she was a mole early in the game. I really think I’d laugh if Jack confronted me with that, but I’m sure Kat is a better player than I am and will listen and humor him while she decides on what to do. My opinion, she’s either going to do nothing or humor him and pretend she’s voting him out.

The biggest thing to note about that is that Nick was in the room with Tommy and Jack and contributed to the plan. Nick is really super committed to this whole playing of both sides thing to the point where even I’m still not sure where he’s at. I’m very confident he’ll still vote out Jack only because he doesn’t want to be a target, but I don’t think he’s going to work with the underdogs unless they win the next HoH. I actually think he prefers the Jack side of the house but knows it’s a losing cause right now. He is basically the definition of a floater who is going to bounce back and forth and make you love him then hate him over and over until he’s finally gone. (maybe love is a strong word. dislike him less?)

Short update tonight, heading to bed. Recap in the morning!