Big Brother 23 – Thursday Afternoon Talk. Will There Be A Flip? 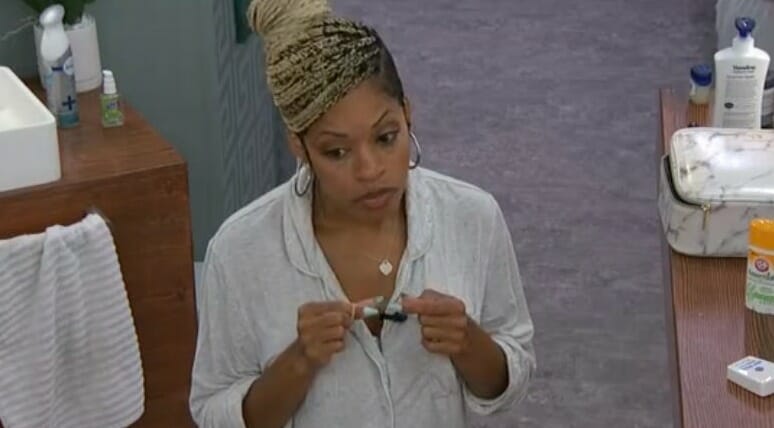 It’s eviction day in the Big Brother house and while I typically don’t post much until the actual eviction show, this is because there is usually nothing going on.  I am watching the feeds today, however, and Tiffany is still pushing Kyland to flip the vote or at the very least, keep convincing him to give DX a ‘pity vote’ which will help flip the house without him realizing it.

She was in the bathroom giving Kyland a ‘fake’ scolding on how he and his girlfriend is sending out her best friend in the house.  I put quotes around fake because anyone who has watched Tiffany for this long knows that the Tiff inside the house is going to tell you how she feels. And right now that clearly appears to be anger at Kyland for getting DX out this week.  Now, she disguised it as playful banter, but how does the phrase go ‘the truth is often said in jest’? She’s not happy about this whole thing but also knows Kyland is a very intelligent person and could very easily win a memory comp (which is what tonight’s HoH will be).  He could very well decide to blow up the cookout and take a direct shot at the strongest personality from the group.

Needless to say, it’s not really smart to piss off people hours before they could potentially win a power that could send you to jury. And she certainly has so much distrust in him that she knows it’s very possible he does decide to do that. Now, WILL he actually do it?

Just a brief update. I will keep you posted if anything does flip, but if it does, it’ll likely be off camera because the feeds will be down quite a bit today as they usually are on Thursday afternoons.

See you tonight!  And check your listings because the NFL pre-season may interfere with the show.