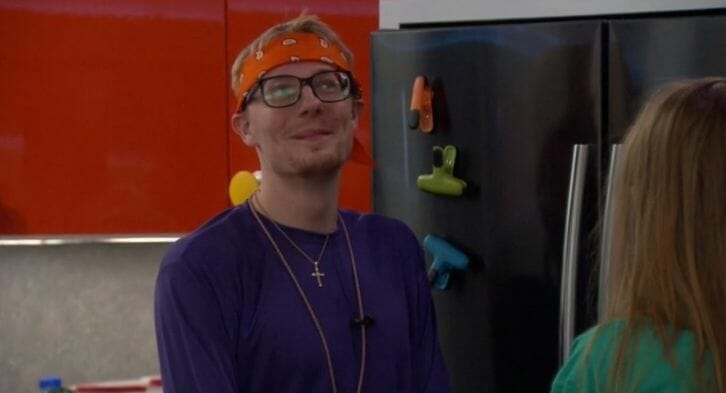 Good afternoon, everyone! It’s always weird watching the feeds the day after a showmance has been broken up because sometimes they go into full-blown depression mode while other times their game completely changes. For Bayleigh, it’s the latter.

Rather than mourning his loss, Bayleigh has dramatically stepped up her social game. She has accepted that’s part of the game and spent a lot of time last night with the very people who voted out Swaggy. This is night and day compared with the Bayleigh who spent all day in bed with Swaggy and it’s good to see. She is there to play the game and sulking over his eviction is just a guarantee to get herself evicted. The best thing she can do is what she’s doing. Play her ass off, make it deep into the game, and try to make the final 2.

Meanwhile, Scottie has a big decision to make this week and it’s not going to be easy considering he has Tyler in his ear. He wants to get rid of one of the bros, but he has had multiple people telling him all different stories on who voted who when it came to Steve. Sam is telling him the truth (they didn’t) while the bros are telling them they voted to keep Steve. A quick run through the numbers will show who is lying, so those two could be in trouble this week.  I expect either one of them to be a target, but it won’t be simple to get them out. He can nominate them both and risk one saving themselves via veto. His replacement would probably be an Angela, and Tyler wouldn’t fight to save her over a bro.

The other option would be a backdoor attempt, but that is also risky as both are big competitors so if he goes that route, it may be safer to just try the double pawn scenario. Put Angela and Rachel or Kaycee on the block and hope neither bro gets picked to play veto. With 2 pawns on the block and Scottie playing, that’s a 50% chance to pull someone off. When you factor in the odds of picking players for the other 3 slots, chances improve quite a bit on the backdoor plan.

Tough decision. Direct attack is best if you have 3 people you don’t mind going out. One pawn is fairly safe but opens the door up to neither target going home. Two pawns is a gamble.

Buy me a coffee, or five!
Follow me on IG

Enough rambling, time for some updates…