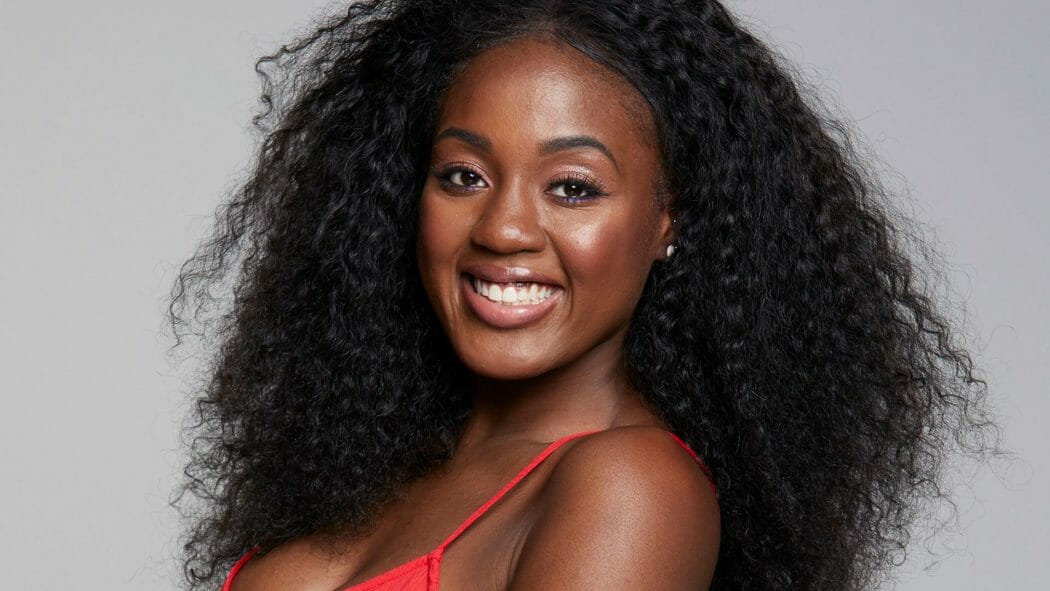 Kemi is a huge fan of Rachel Reilly (ugh) but also wants to play like Kaycee which should be a tough challenge because the two couldn’t be further apart. Her strategy is to find a ‘ride or die’ and win all the comps until the end, and that person will ideally be a showmance. Sounds easy! Winning comps every week is clearly the easiest strategy to use and I’m surprised more people don’t just rely on that path. It’s just as easy as doing Christmas shopping playing carnival games or having a career playing scratch tickets.

Side note – I want to read her blog on guys she’s dated!

Middle of the pack player. She’s going to search for her ‘Brendan’ and not focus so much on the game and find herself on the wrong side of the house. She’ll be outnumbered and eventually picked off by whatever power group is running the show. Pre-jury player.

Three adjectives that describe you: I’m very positive. I like to see the silver lining in situations because what’s happened has happened, so deal with it in a way that benefits you. I’m also very goal-oriented. Though my goals do change from time to time, I’m definitely a “by any means necessary” sort of woman. I’m a bitch. This is a (not so) sad truth. When I feel provoked I can be extremely vicious. It took me 24 years to actually learn the difference between “feeling provoked” and actually “being provoked.” Growth.

Favorite activities: Contributing to the economy (shopping), discovering new restaurants (recent foodie), and traveling with my friends (hoping to make it to Vegas soon so any potential facepalms can be filed under “oh, I was young.”)

Which past Big Brother cast member did you like most?
I absolutely loveeeeeee Rachel “I am Vegas” Reilly. I love how unapologetic and authentic she was. Not a care in the world if you didn’t like her because she was here for the money and her man. That’s 100 percent me! Jessica Graf is also up there for the exact same reason but wow I love Rachel so much!

Do you have a strategy for winning the game?
My strategy in the house would be to make as many connections but fewer alliances as possible, similar to Kaycee from BB20. I’d hope to be well-liked so I could use that to my advantage and always be in the know in case I need to do some back-stabbing. But if I’m not well-liked then I guess I just have to bust everyone’s ass in HOH and Veto competitions. I’d love to have a final two with someone to tag team competitions with (another reason I loved Rachel). One of us wins either the HOH or Veto every week to carry us to the end. Preferably in the form of a showmance.

My life’s motto is…
“You get more with honey, even if the honey is artificial.”

What would you take into the house and why?
– My puppy. I’ve never been away from him for more than one week!
– My phone, but mostly to play music.
– The Coldest Winter (best book, ever).

Fun facts about yourself:
– I have a miniature Dalmatian. It’s funny because I get stopped every five seconds to answer the same questions about him but I never get tired of it. My ex would say I love the attention and I can’t argue with that. He bought Billion for me so he’s a little bitter to have spent that much on a dog to become an ex only two weeks later. Cheers to being a woman!
– I keep a blog of guys I’ve dated/hooked up with to amuse whoever has access to it. I guess I could call myself a writer since I live in New York now. Most dates are horror stories so why not detail a first date that involved a guy telling me there are only two types of women: pay for play or wifey.
– I’m one of those people that if I like you can do no wrong in my eyes. I don’t see anything wrong with it. My friends call it toxic and enabling, I call it seeing the best in people.