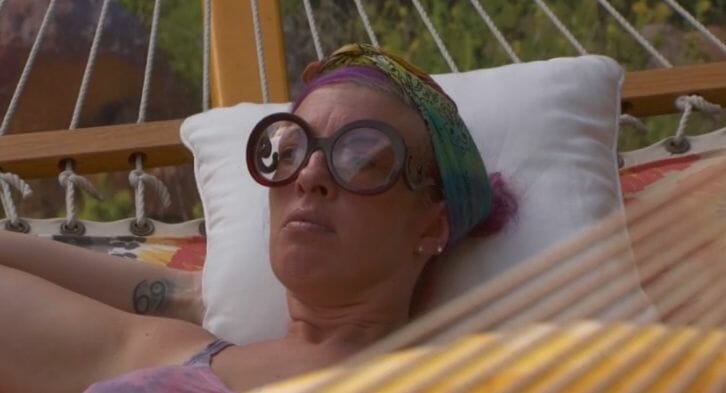 Alright, a lot went down this afternoon in the Big Brother house, so I’m going to try to write is as best as I can..

Kaitlyn ended up going through with Tyler’s plan of backdooring Swaggy. To everyone’s surprise, he handled it really well and just went to think on it for awhile before making his move. During this period, Kaitlyn played victim really well and got a nice long massage from Brett while she had everyone else kissing her ass. Rockstar decided to head on up to the HoH to take the first shots and sat there listening to Kaitlyn ramble while taking moments to trash Tyler and the other side of the house when she could.

Kaitlyn gave RS the go-ahead to tell Swaggy to come upstairs and that’s what he did. The only problem here is that he wanted Tyler to be there as well.

Swaggy, Tyler, and Kaitlyn spoke for a long time. Maybe 90 minutes or so. A lot of the time was spent with him telling Kaitlyn that he understands what she did, why she did it, and that he’s not mad. He promised if he remained in the house, he wouldn’t go after her and they could be part of the alliance again. Swaggy played the sympathy card really well and Kaitlyn ate it right up. In fact, right after Swaggy left, she immediately told Tyler that they have to keep him. Tyler told her that the shots were already fired and there is no putting the bullet back in the gun (my words, not his). While Swaggy may indeed keep his word, there is no guarantee his alliance will so they have to keep going with the plan – and he’s right. Rockstar is still angry and still wants to get Tyler out asap.

I covered a lot in my day thread, but let’s continue here

Oh, before I begin, a lot of people have been asking how to donate.  Here is the link!  Thanks!!