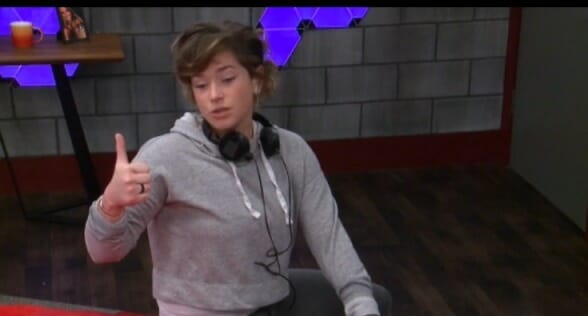 I want to thank everyone for being patient with this site over the last 24 or so hours. There was a bug that took a while to find that prevented the pages from being updated unless you were logged in. Well, not really a bug, but if you know about websites, there was an option buried somewhere that cached pages for those not logged in and for some reason it wasn’t clearing that cache.

Technical stuff aside, it’s fixed and if you see that again, please let me know asap so I can get on top of that.  I just wish I could have had some sleep.

Today is the veto comp and the only two not playing are Brett and Tyler. Surprising to see Tyler not play, especially when the numbers are this small, but that’s just the way the game works. Conspiracy theorists love pretending that production rigs the game in favor of certain people every year – and Tyler is the guy people target this year as the favorite. However, with all the information I know about the show, there is no rigging for a certain person. I’m positive that the Diary Room tries to influence decisions by hinting around at certain things because they want the best ratings possible for the show, but I’ve seen no evidence of actual rigging competitions for players.  There are so many examples of times when production could and should have rigged a competition only to have it not go their way. Think they want good drama to leave early (like Cody from BB19)?

Losing track. Today is a not very important veto competition because the house really doesn’t care who leaves between Haleigh or Fessy. Regardless of what happens today, one or both will be sitting on the block come Monday afternoon and they don’t currently have the votes to stay over anyone. Now, if there was a chance they could stay, you could root for one to win veto and hope someone like Sam is nominated and evicted, but I just don’t see that happening.  Furthermore, it matters even less because I think Haleigh or Fessy can compete with Scottie in the Battle Back so it’s basically a coin flip on who will return.

It would be kind of cool to see Scottie come back and have a strong pair with Haleigh without Fessy’s dumb suggestions in her ear, so that’s about all I’m rooting for at this point.

Alright friends, it’s been a long day and as much as I’d love to cover post-veto, I’m beat. Mell will post about it in the AM