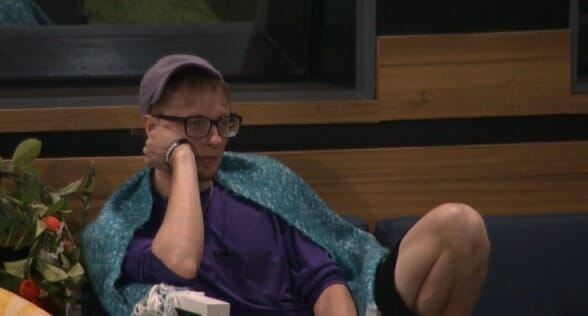 Yesterday was a slow day, but overnight got a little interesting when Sam sat down with Brett for like an hour which is always good for some unintentional comic relief. Although this time it wasn’t creepy or cringy, it was more of Sam just upset because Scottie called her out during his PoV speech so Sam was confused. She thought Brett actually helped him with his speech because he helped RS with hers, which I guess makes sense if Brett is the official speechwriter but not all speeches originate from him.

After her talk with Brett, she managed to get Scottie alone for a few minutes. Scottie is still clearly trying to process exactly wtf happened to him this week and it’s going to take another month for him to actually realize why he’s in this situation. One of the last things on the mind of Scottie would be someone like Fessy jealous of him over Haleigh but that’s essentially what it boils down to. The original theory of his jealousy was always there, but it was confirmed when JC told him how much Scottie loves Haleigh which resulted in his (Fessy) mind made up.

On a personal and game level, I think it’s absolutely absurd what Fessy is doing. The term was said a lot last year about Cody but this is an actual example of Fessy throwing away $500k over a girl he just met. Unlike Cody, Fessy actually has a chance to make it pretty far in the game and with a jury full of friendly faces, he’d have a damn good shot at winning the whole thing.  Had Fessy played the way he was supposed to and got a L6 member out (let’s say Angela), the house would be 3 vs 3 vs 2.

Out of those remaining players, let’s look at comp wins:

That gives them an edge in competition wins and when you factor in that Tyler won 4 out of those 5 comps for L6, that gives the house a pretty big target moving forward.  Hive would have been a bit more balanced as all 3 players have proven they are very good at comps.  No matter how good the numbers are for L6, they’re useless if they don’t win the comps. That’s the beauty of this game and that’s why Fessy is a damn fool for throwing Scottie away.

Yes, Fessy and Haleigh can pull a Rachel/Porsche and string together a bunch of comp wins in a row, but the odds of that happening are much greater if you swap out Angela and keep Scottie in the house.

Rockstar may have her reign as ‘biggest blunder of the season’ erased just a week after she did it.  In her defense, she checked with Tyler because she was unsure of her own answer and Haleigh still could have beat Tyler had she not slowed down after Tyler found his (incorrect) answer. Rockstar’s blunder was a choke which is understandable in pressure situations. Fessy had like 12 hours to think about his decision and a whole house full of people to talk to before he made it final. Just stupid.